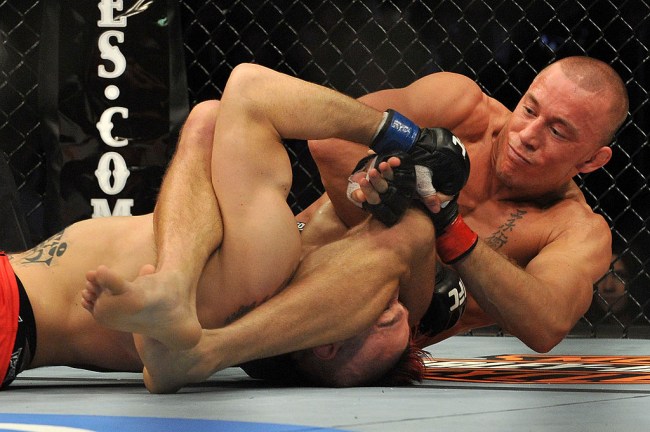 Georges St-Pierre one of the most dominant forces that MMA has ever seen. The former welterweight champion has boasted a 25-2 record over the course of his storied career, and there’s a reason so many people are looking forward to his much-anticipated return to the sport when he faces off against Michael Bisping at UFC 217 on November 4th.

GSP’s roots in fighting can be traced back to his childhood in Quebec. He first started learning karate when he was seven years old in order to defend himself from a bully at school (and somehow never earned the nickname “Georges-san” because of it). From there, he went on to study boxing, wrestling, and Brazilian Jiu-Jitsu before graduating to a long and storied career of kicking and punching people in the face.

St-Pierre has been making the rounds to promote his upcoming fight, and he recently sat down for an in-depth interview with Hot 97 in which he recounted an encounter he had with the aforementioned bully a number of years after the two had initially been at odds:

“I saw him, and he was begging in the street. I don’t know if he was homeless, but he was asking for money… I said ‘What are you doing here?’ (He said) ‘Can you help me? Things are not going well.’ Well I’m like ‘Man, what are you doing here? You’re a tall guy, you’re good looking, what the hell? You’re in good shape!’

“So I gave him a few dollars, and I tell him ‘Get out of here man. You should be ashamed, you should be embarrassed of what you’re doing, man. A lot of guys would kill to be like you. You know you’re full of potential. You’re good looking, healthy, tall, and strong. Go do something with your life!’”

According to GSP, the man showed up at his parents’ house a few months later looking for the fighter. He informed them that the incident had inspired him to get a job and that the brief meeting with St-Pierre had changed his life for the better.

St-Pierre has a contract for four more UFC fights, but it seems like he might have a career in motivational speaking once he’s done in the Octagon. If a jacked dude with a reputation for making grown men crumple into a ball told me to get my life together, I’d probably listen to him too.