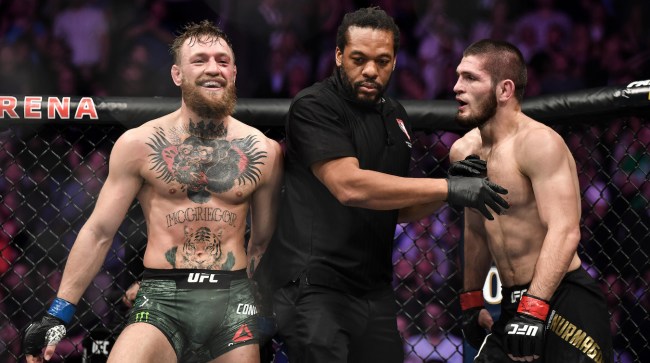 For the first time in nearly a year-and-a-half, The Notorious Conor McGregor is returning to the UFC Octagon for an epic clash with… Donald “Cowboy” Cerrone?

Look, as far as I can tell, and I’m by no means a big UFC guy, Cerrone seems to be a supremely respected professional with an illustrious UFC career. But, that said, he’s not exactly a headliner these days, which makes his matchup with McGregor somewhat surprising, especially considering how vocal he’s been about wanting a rematch with Khabib Nurmagomedov.

Appearing on The Jim Rome Show on CBS Sports Network, UFC President Dana White revealed that while McGregor has been asking for a rematch with Khabib Nurmagomedov for “awhile”, if he defeats Donald “Cowboy” Cerrone at UFC 246 this Saturday, he’ll finally get exactly that.

UFC president @DanaWhite says Conor McGregor has wanted the Khabib rematch for awhile and that if he beats Cowboy Cerrone this weekend at #UFC246, he'll get it. pic.twitter.com/HwSz1jTWK7

McGregor and Khabib Nurmagomedov, the reigning Lightweight Champion, originally faced off in the main event at UFC 229 on Saturday, October 6, 2018. Khabib won the fight via submission with a neck crank in the fourth round and McGregor has yet to fight in the UFC since.

As for Khabib, he’s since gone on to retain his title against Dustin Poirier at UFC 242 and will defend his Lightweight title belt against Tony Ferguson at UFC 249 on April 18.