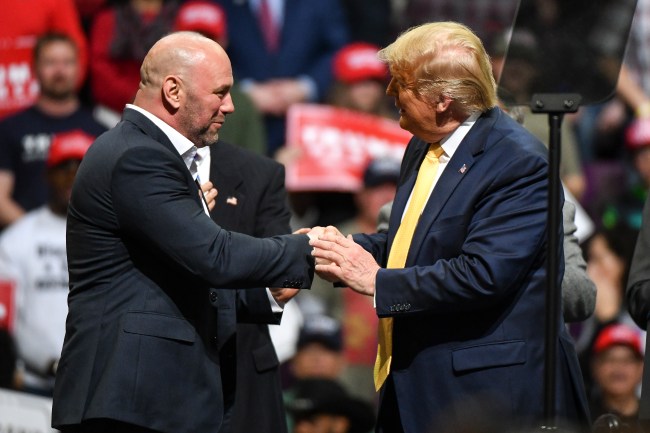 Dana White doesn’t care if some UFC fans are angry at him for being openly friendly with President Trump.

Last week, some fans threatened to boycott the UFC after White made an appearance at a Trump rally in Colorado.

"He's a fighter. He loves this county. He's doing great things for this country. And we got to win this election again, ladies and gentlemen!" – @danawhite x @realDonaldTrump pic.twitter.com/uhQPmvQldq

.@danawhite You support for a disgusting person like @realDonaldTrump makes me question buying your product and it’s not fair to the hard working fighters you employ!

UFC president Dana White took the stage briefly at the outset of the rally, saying he wasn't a "very political person" before adding that he's known Trump for more than 20 years & that he has remained a loyal and good friend even after becoming president

TMZ caught up with White on Friday and asked him about his appearance at the Trump rally and he wasn’t shy about speaking about his friendship with the President.

“Yeah, I wasn’t really campaigning. He called me and asked me if I wanted to go to Colorado. He said, ‘Wanna go to Colorado?’ I said, ‘Yeah,’ so we flew to Colorado for the day then back to Vegas. We were just hanging out and talking fights. I wasn’t even supposed to speak that day, I was just cruising over there with him,”

“I can’t say it enough. This guy — when I say this guy, I’m talking about President Trump — is such a good friend and such a loyal, amazing guy, man. He’s a great guy. He’s been a friend of mine for a long time,

When asked if he cared about certain fans being angry about his friendship with Trump this is what White had to say.

“I could give a shit. I don’t give a shit. If you don’t like me because I’m friends with this guy, that’s your problem, not mine,