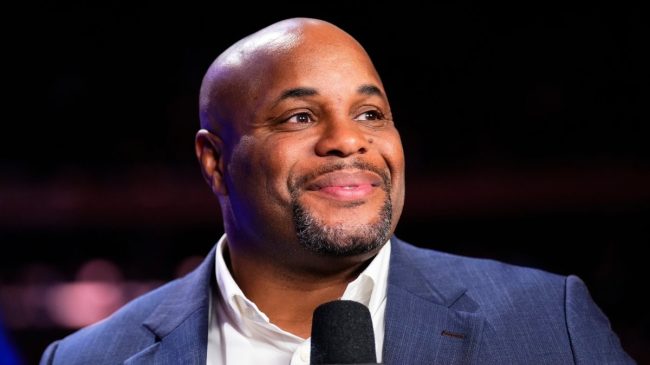 The Middleweight division became a whole lot more interesting after Alex Pereira became the new champion. Plenty of other fighters are eager to get in the cage and take their shot at the new champ. However, Daniel Cormier has one specific fighter in mind on who he thinks can defeat Pereira.

According to MMA Junkie, the UFC legend believes that Khamzat Chimaev “would be a massive favorite to beat Alex Pereira.” The new champion proved to struggle a bit in defending the ground in his fight against Israel Adesanya. For that reason, Daniel Cormier sees Chimaev winning this matchup.

“If you schedule him and Khamzat right now, and Khamzat goes, ‘This is my belt, let me fight,’ Khamzat would be a massive favorite to beat Alex Pereira. Just because of the style. The style just does not match up yet and Pereira, he’s so young in his career that this (Adesanya) was honestly the ideal champion for him.”

Chimaev recently changed weight classes after struggling to make weight for his last bout. He’s now in the Middleweight division, making himself a serious contender down the line. After Alex Pereira won the title, Khamzat Chimaev called Pereira “easy money,” per MMA Junkie.

We’ll see if those two ever step into the octagon. For now, rumors are that Adesanya will have an immediate rematch with Pereira. Especially considering that will be a huge money fight. Even so, Daniel Cormier believes any strong wrestler would be a tough matchup for the current champ.

“Because I truly do believe that there are some very difficult matchups for Alex Pereira that weren’t as difficult for Israel Adesanya and that, to me, was shown in the third round when Izzy was able to control him once he took him down. You stick him in there with a grappler or a wrestler, he might get drowned out.”

Keep an eye on the UFC for now, as the Middleweight division could become one of the wildest weight classes in the organization next year. If Pereira can repeat another win over Adesanya, then things could really become interesting.