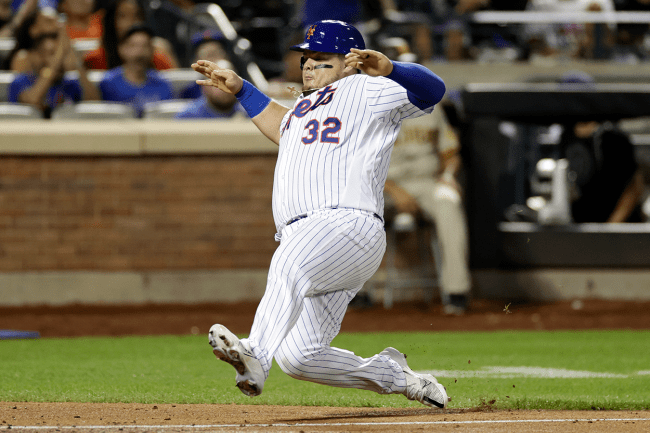 Daniel Vogelbach is a big fella and his debut with the New York Mets was perfect. He started on Sunday night after being acquired on Friday from the Pirates, started at designated hitter and finished 1-for-3 with a walk and a run scored en route to an 8-5 win over the Padres.

While the lefty’s debut could not have gone much better, it was not his plate appearances that left MLB fans in awe. It was his base-running.

Vogelbach stands 6-foot-0, 270 pounds. He is beef personified and he is perfect.

Baseball is the only sport where that frame makes any sense and although you might expect Vogelbach to be slow because of his size, he is not. He can really scoot!

After reaching second base in the sixth inning, a base knock sent Vogelbach running. He got a great jump off of the bag and received the wave home as he rounded third.

We, as baseball fans, are the better for it.

Vogelbach was absolutely CHUGGING as he turned for home and beat the throw to the plate. If the sheer greatness of his surprising speed was not enough joy for one night, the biggest apple in The Big Apple slid into home with a quick, casual slide that rivaled that of Trae Turner.

The entire sequence, from Vogelbach’s jump, to his turn, to his slide, was art. He went from second to home in less than eight seconds, which is about 33.75 pounds per second— a stat that I just made up.

Take a look at the glorious moment:

Our lives are better because Vogelbach is in them. We are forever grateful for his presence.