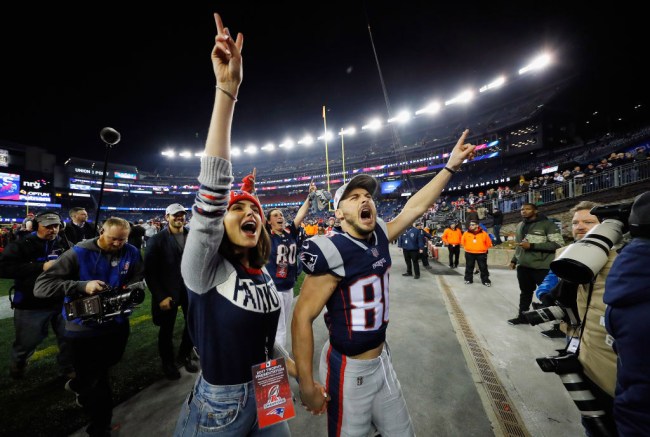 Danny Amendola, part-time model and New England Patriots wide receiver, had himself a day on Sunday. Not only did his team come back to beat the Jacksonville Jaguars in the AFC Championship to advance to yet another Super Bowl, he also was named the game’s MVP. Snagging seven receptions for 84 yards and two touchdowns, plus throwing a pass for 20 yards will do that. No wonder Gronk calls him “Danny Playoff.”

It’s also probably part of the reason why his girlfriend is 2012 Miss Universe and 2018 SI Swimsuit rookie Olivia Culpo. That and, you know, being a burgeoning model and all.

So in the grand tradition of Kate Upton after Justin Verlander’s World Series championship, Culpo and Amendola had themselves a nice little personal celebration after his big game.

Guy’s a model, an NFL wide receiver, now has a shot to win his third Super Bowl ring, and has a girlfriend who was Miss Universe? Not too shabby for an undrafted free agent from Texas Tech. Dude didn’t even play in the NFL the year after he graduated from Tech – no one wanted him until the Rams grabbed him 2009. I guess when your teammate Michael Crabtree heads to the NFL in the same year you tend to get lost in the wide receiver shuffle come draft time. Amazing.