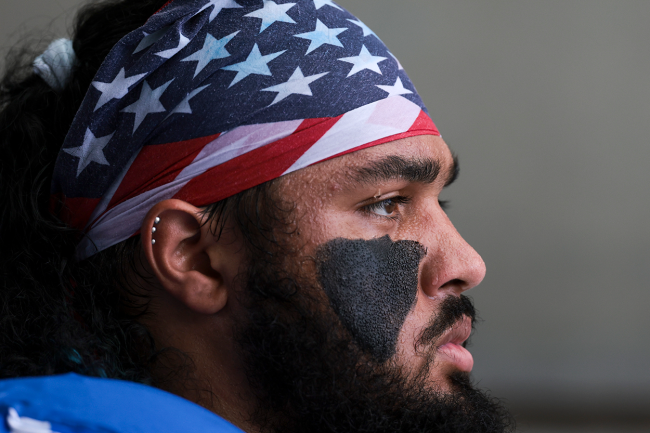 Kentucky offensive tackle Darian Kinnard waited longer than he expected to hear his name called in the 2022 NFL Draft, but when he did, it made for an an incredible moment. The Ohio-native and his family’s reaction to the pick brings all of the feels.

On Saturday afternoon, the Chiefs decided to trade up in the fifth round for some help on the offensive line. To do so, the team traded the No. 148th overall pick and a seventh-round pick to Seattle in exchange for No. 145 overall.

With the 145th pick in the 2022 NFL Draft, Kansas City selected Kinnard. He and his family were overcome with emotions and moved to tears as they hugged the newest member of the Chiefs offensive line.

Take a look at Darian Kinnard and his family’s reaction to being drafted by the Kansas City Chiefs:

Shocking it took until Day 3 but Darian Kinnard comes off the board in the 5th round to the Kansas City Chiefs.

“You’ll be blocking for Patrick Mahomes!” his mom said 😂 what a moment @FOX56News #BBN pic.twitter.com/JKMGj4Rj4I

At 6-foot-5, 322 pounds, the former Wildcat mauler was considered to be a third round prospect by most draft grades. As a result, by getting Kinnard in the fifth round, the Chiefs got someone who can move inside to the guard slot if need be.

Beyond his massive frame, the Outland Trophy semifinalist is really good at getting movement in the run game. While his pass protection could use some work, that comes with time.

Kinnard is a mauler-type who looks to bury defenders with every snap. Immediately, he provides depth to a position that could use some.

Long term, if he can continue to develop, Kinnard could become a multi-year starter for whom you do not have to think about at the position. The confidence that could come from Kinnard’s addition to the line is huge.