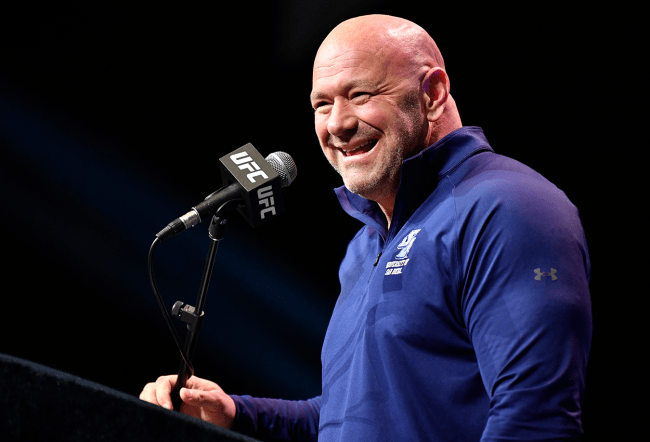 Dana White does not like Darren Rovell and went so far as to call him a ‘dipshit’ following UFC 269. In response, Rovell is calling out the president of the Ultimate Fighting Championship and challenging him to a debate.

Here is what White had to say about Rovell (whose name he claims to have forgotten) on late Saturday night / early Sunday morning. His comments came after Amanda Nunes was submitted by Julianna Peña in a second round upset.

White’s comments stem back to December 29, 2018 after Nunes defeated Cris Cyborg in the co-main event of UFC 232. Rovell said that Nunes’ success — beating both Cyborg and Ronda Rousey in a span of two years — was “brutally damaging.”

He said that Cyborg is not on the same level of marketability as Cyborg or Rousey.

Between Rousey and Cyborg, Amanda Nunes has singlehandedly killed the most valuable women in the sport.

Nunes isn't in the same marketing ballpark as either of those two.

In response, White called Rovell (after again pulling the ever-hilarious “what’s his name?” bit) an idiot that “he cannot stand.” He said that he is “pretty resilient to this dumb shit” but “oh my god.”

Dana White does not like Darren Rovell much pic.twitter.com/ZUNMmx82u5

Rovell, after trending on Twitter the following morning, wrote a blog post in response to White’s comments. He doubled down in the post and provided the numbers to back up his polarizing claim.

Here is what Rovell had to say:

I understand the responsibility of my words, which is why I take what I write — and in this case, tweet — with the necessary gravity.

Dana does a lot for the show of it all. And he’s amazing at it. He’s an incredible promoter, which is why ESPN named him last month, along with Lorenzo Fertitta, the single most marketable people in the UFC over the last 25 years.

So let’s start with that. I have a lot of respect for Dana. But last night’s bashing of me wasn’t real. It was part of the show.

UFC fans cheered Dana on and my haters furthered it along — what a one-sided takedown!

And that’s exactly what it was — one-sided. So now comes my turn.

You can read the rest of the post here, but essentially, Rovell’s case was that “sex sells.” He said that the “sad reality” of sex selling is “why the UFC pushed Rousey and Holly Holm so hard, and part of the reason why Maria Sharapova, Serena Williams and Danica Patrick made so much money.”

Rovell also pulled a quote from Nunes herself in 2017, acknowledging that she is not what the UFC wanted:

“They’re not idiots, they know what they do,” Nunes said. “It’s all about marketing. That’s why it’s the UFC, that’s why they’re doing it. They want to get someone to beat me for me to get out badly. I told them about it, I know that’s what they want, someone that they can really promote and make money with.”

Three years later, on Saturday, Nunes was choked out by Peña.

Nunes’ loss was likely disappointing for White. Had she won, it would have set up a massive money fight with Kayla Harrison.

As Nunes tapped on Saturday night, Harrison was visibly upset. Nunes, in a sense, fumbled her bag as well.

Regardless of the outcome, White saw Nunes and Harrison as a giant cash cow and said so himself. And then he proceeded to discuss Rovell and call him a “dipshit.”

The guy who always “forgets” my name.

For the record, I said Amanda Nunes was not marketable. Over her time as champ, she got tiny deals with Celsius, Crypto App, Trifecta Meals and Revivid Hemp drops.

With her record, Rousey, Tate, Jedrzjczek or VanZant would get more views. https://t.co/F8lTxEq2v1

He also called White out, saying that he will debate him on the topic of Nunes being marketable at any time and any place.

Dana is really great at taking shots at 1 in the morning.

He might have the potty mouth this forum applauds, but I’ll debate him in any forum on this topic with data and crush him.

Rovell then took to his comments on Twitter to defend himself.

Is think it’s the other way around? He’s called me out four times.

Right. Every time, I come back with facts and he ignores it. That’s MY issue?

White almost certainly will not respond. He can’t even bother to remember Rovell’s name. However, it would be very interesting to see what he has to say.