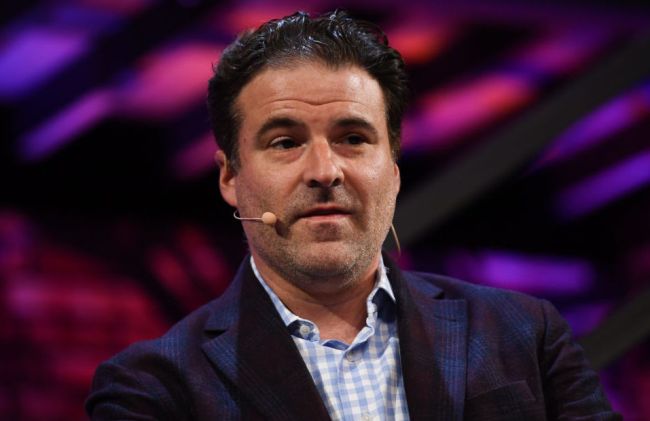 At the end of 2016, New York Magazine revealed one of the more impressively ambitious projects I’ve seen during my time on the internet when it published “The Year in Memes,” a two-month undertaking in which the outlet dug through social media to name the 366 topics that managed to dominate the online conversation more than any other on each and every day of that year.

The list included all-timers like Harambe, Dat Boi, and Ken Bone, the last of whom took the world by storm after being handed the microphone on October 9th during a town hall leading up to the presidential election, a little over a week before Hillary Clinton and Donald Trump faced off against each other in a debate that took place on October 19th.

It’s safe to say that campaign was slightly contentious and that showdown was no exception, and while the website dubbed teens posting about the PSATs the winner of that day, in hindsight, the award should’ve gone to Darren Rovell, who decided to chime in with a first-ballot selection into the Terrible Tweet Hall of Fame.

In doing so, Rovell earned the honor of being the man responsible for one of the Best Worst Tweets in history, which would be a serious contender for the top spot if it wasn’t for Peter King’s infamous anecdote about how he bluntly broke the news of the death of Robin Williams to an unsuspecting restaurant host, which I reflected upon when it celebrated its sixth anniversary over the summer.

“I think about this tweet a lot” has become a meme of its own in recent years but there isn’t a single one I find myself constantly reflecting on more than Rovell’s to a point where I put it as an event into my calendar to remind me of the fateful day it was unleashed upon the world. I was ready to give it the same treatment I gave King’s on Monday but sadly never received an alert, and it had totally slipped my mind until Darren was nice enough to remind me late last night.

Has gotten retweeted every day since then.

Couldn’t imagine how evergreen this would be.

Rovell willingly subjects himself to an unreal amount of shit thanks to a crippling Twitter addiction that makes me feel so much better about my dependence on it. I’ve thrown a fair amount of crap his way myself over the years because he’s an incredibly easy target but I’m more than willing to admit that I respect the hustle that has led to him amassing over two million followers and find many of the obscure stats and stories he prides himself on genuinely interesting.

I normally try to avoid engaging him directly on Twitter because he usually finds it impossible to dismiss the urge to respond to the endless criticism lobbed his way but I just couldn’t help myself from chiming in after he risked pulling a muscle from patting himself on the back as hard as he did.

Happy anniversary to what would be the Best Worst Tweet in the history of this internet hellhole if Peter King had managed to resist the urge to hit “Send” the night Robin Williams died https://t.co/HRpI4wtUWZ

It didn’t take long for a notification to pop up on my phone informing me he’d decided to respond by questioning how the tweet could be so terrible if it’s had so much staying power, as he apparently lacked the ability to understand why people have been so fixated on it since he hit “Send.”

I don’t want to way too much into the political fray here, but if you’ve paid even a modicum of attention to the news over the past four years, you’re likely aware that a sizeable chunk of Americans has been less than displeased with the endless drama and controversies that have negatively impacted the lives of countless people. As I see it, the fact that Rovell thinks “tremendous content” is the best way to describe these developments is fantastically distasteful—a sentiment I was more than happy to share when I answered his query.

Because it is unfathomably tone-deaf to use the phrase “tremendous content” to describe events that have negatively impacted the lives of countless people and led to the death of hundreds of thousands of Americans and the fact you seem to pride yourself on that is WILD https://t.co/Z1UlalV7lw

I was first introduced to the concept of “evergreen” content when I took a media class during my freshman year of high school so anyone who makes a living as a reporter should be more than aware that the term is commonly used to describe a particular story or sentiment that continues to resonate thanks to its relevance in relation to other events that transpire after it—an idea Rovell apparently fails to grasp based on his response.

So you really have no idea what this was referring to? You have no idea that this was after an embarrassing Presidential debate. And you’ve decided to make the call that the tremendous content is Covid? Jeez. That’s a hell of a turn.

A year before the tweet that sparked this back-and-forth was brought into existence, The New York Times ran an article that discussed the fact that writers can only do so much to control how their work is interpreted once it’s published even if it goes against the intentions behind it. Based on the above response, Rovell may not have considered it would be as “evergreen” as it has been because it has applied to so many other things that have happened following that debate, but that’s ultimately the reason it’s been retweeted on a daily basis since then.

Why would you use the word “evergreen” in a humblebrag about its staying power? You known reason it’s been tweeted every day is because of the endless embarrassment some people feel America has been subjected to since then. Why else would you bring it up today? https://t.co/3MB3lXDBHy

Darren was kind enough to bring his end of our exchange to a merciful end when he pulled the classic “Sorry you don’t know how to read” card. However, my alleged lack of reading comprehension pales in comparison to his ability to comprehend reality, and as I mentioned in my closing statement, claiming that he decided to bring up a tweet about a debate from four years ago simply to remind people that a time traveler didn’t go back to change history and subsequently make his observation about that specific event retroactively inaccurate is something I find impossible to buy into.

Well, if I gave you the benefit of the doubt, it assumes A) You’re too dense to understand why it keeps getting retweeted and B) Randomly proud that an observation about a debate from four years ago is still true as if history somehow could’ve been altered since then. Good talk. https://t.co/FPBAJubhyf

Finally, you can’t engage in an argument with someone with millions of followers without a bunch of random people jumping into your mentions and this was no exception. In 1990, author Mike Godwin came up with the internet “law” he lends his last name to that states there’s a correlation between how long a conversation online goes on and the likelihood someone will feature someone pulling out a comparison to the Nazis.

Over my decade writing on the internet, I’ve discovered there’s a similar phenomenon I’ve (admittedly vainly) dubbed “Toole’s Law” that dictates anyone who disagrees with someone with a last name that resembles an insult will point out the similarities as if they’re the first person to ever do so and last night was no exception.

This guy is very aptly named.

If we can learn anything from this, it’s that the internet is a dumb place filled with dumb people with dumb opinions, which really shouldn’t be news to anyone. Would my life and mental health likely be better if I’d never decided to make a living on it? Probably but hey, at least I got some content out of this.