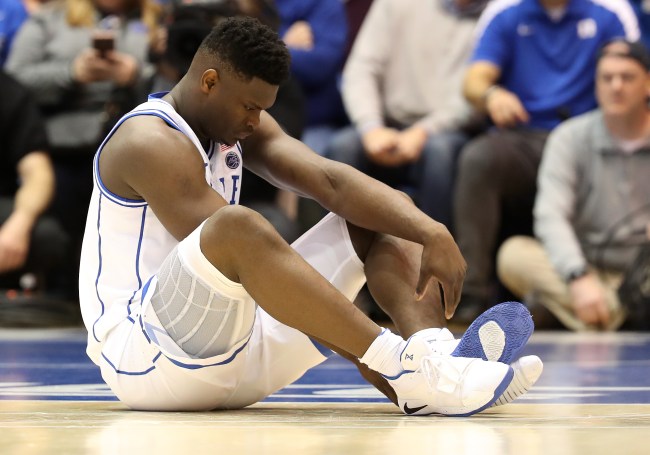 Duke says freshman Zion Williamson (knee) will not return to Wednesday game vs. UNC. Projected 2019 No. 1 pick slipped early in first half. pic.twitter.com/dq5whZzwAq

Immediately after Zion’s injury Puma hoops decided it was a good idea to capitalize and take a shot at Nike.

Puma Hoops have done so many things right with their social strategy, but this was a horrible move (tweet has already been deleted). #UNCvsDuke

[Re: Zion Williamson getting injured] pic.twitter.com/8c29jcNB9n

Former ESPN writer Darren Rovell also had a few of his own insensitive tweets when he started going full Rovell and began talking about the effect of Zion’s injury on Nike’s stock.

It’s not a material loss to Nike’s business, but I wouldn’t be completely surprised if Nike’s stock, on no other news, didn’t do a little dip tomorrow morning from this prominent event.

Nike up to #3 nationwide on Twitter trends at the moment. pic.twitter.com/i1x2KLb7bw

Worst Nike shoe malfunction since Eliud Kipchoge missed a record in the Berlin Marathon in 2015 after the insoles fell out of his shoes. Nike said they were prototypes. Doesn’t compare to the stage that the Zion malfunction was just on. pic.twitter.com/WbJyKR2oxU

JFC man, throw in a “I hope he’s okay” for appearances