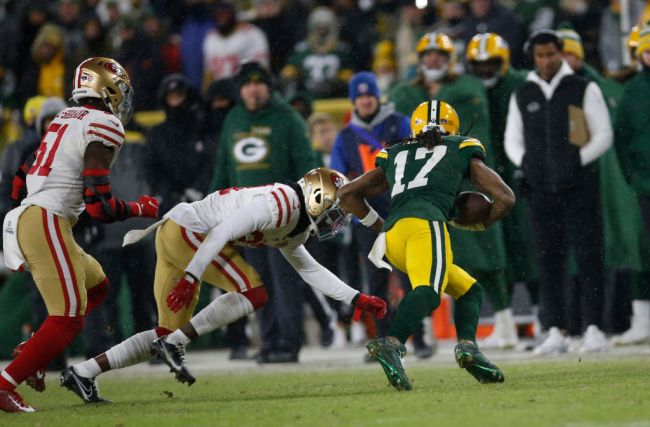 Davante Adams being traded from the Green Bay Packers to the Las Vegas Raiders this offseason was a move that shocked football fans and seemingly changed the way the wide receiver market works in the NFL.

Now it’s being reported that Adams had actually already tried to make the move happen before. According to Raiders quarterback Derek Carr’s brother, David Carr, Adams had tried to get traded to the Raiders for several years.

Davante Adams actually tried to get traded to the #Raiders and Derek Carr from the #Packers and Aaron Rodgers for several years, according to Derek's brother, NFL Network's analyst David Carr.

It came close to happening a couple of years ago. pic.twitter.com/I1y98lSOjG

Adams and Carr have plenty of history together having played together at Fresno State. The two seasons they played together were certainly productive for Adams. He racked up an incredible 3000 yards and 38 touchdowns, helping himself and Carr work their way into the 2nd round of the NFL Draft.

Playing with Aaron Rodgers was a situation that worked out pretty for Adams too. His career got off to a bit of a slow start, but in his 3rd year he developed into one of Rodgers’ favorite targets. Since then, he has become arguably the league’s best receiver, posting at least 1300 yards in 3 of the last 4 seasons, including 1553 in 2021.

Carr has never had a receiver top 1200 yards in a season in the NFL, but that could change now that he has Adams to throw to once again. Otherwise, that huge contract the Raiders just gave Adams might not seem like such a great idea anymore.