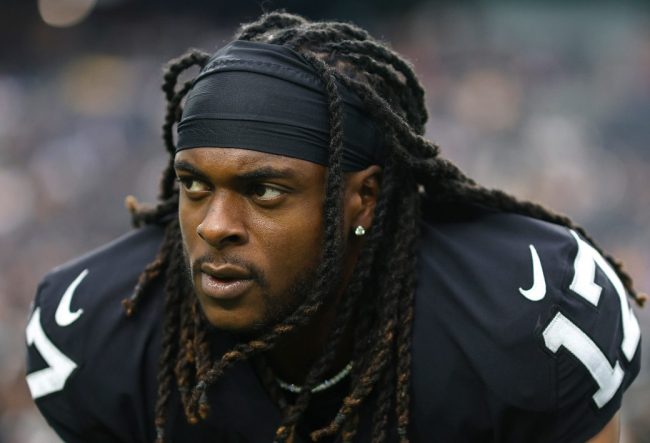 The Las Vegas Raiders made a massive upgrade to the wide receiver room after acquiring Davante Adams from the Green Bay Packers. This offense should be electric this year, as Derek Carr has plenty to work with. However, Adams was heard describing his mindset and it’s no wonder why he’s one of the best receivers in the league.

During an appearance on The Pivot Podcast, Davante Adams was asked about his mindset when facing cornerbacks. He goes into detail about going into “terminator mode” as he lines up on the line of scrimmage. Apparently, the Raiders receiver has three moves in place on how he’ll beat his opponent every single time.

#Raiders WR @tae15adams on his mindset when facing a CB.

Opposing cornerbacks just have no chance when lining up against Davante Adams. No matter how they stack up against him, the Raiders’ star wide receiver clearly has a plan in place. It’s interesting to hear him break it down though, as Adams hasn’t been all that vocal throughout his career.

He’ll be utilizing his skillsets in Las Vegas now after spending his career with the Packers. Although Derek Carr isn’t ath the same level as Aaron Rodgers, he’s still a respectable quarterback in the NFL. Davante Adams should give the Raiders the boost they need on offense that was missing last season.

Look for this franchise to be one of the best in a loaded AFC West division. As long as Davante Adams maintains his superstar-caliber play, Vegas should have no problem being in the playoff hunt late in the season. Look for the Raiders to feed Adams the ball often, as he’s one of the best weapons the NFL has to offer.