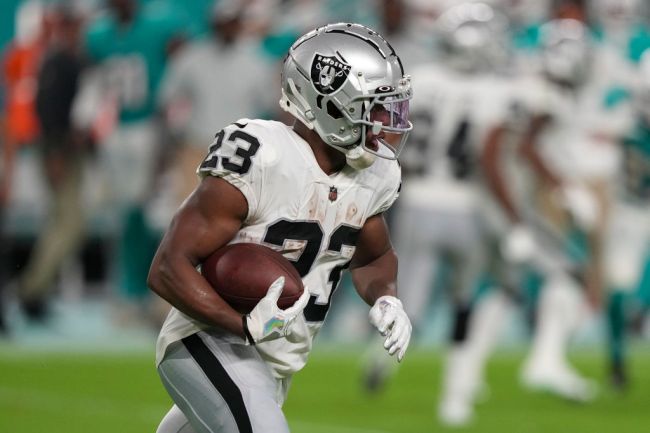 The Las Vegas Raiders made a big change to their offense today.

According to Ian Rapoport, the Raiders have decided to cut Kenyan Drake just a year after signing him to a 2-year, $11 million deal.

With trade interest not materializing due to his contract, the #Raiders will, in fact, release Kenyan Drake. https://t.co/sc5Q2CE4et

Yesterday, Drake revealed to Josina Anderson that he was expecting to be cut after seemingly becoming the odd man out in the Raiders backfield.

Just got off the phone w/ RB Kenyan Drake on the #Raiders moving on: "I'm just vibing at the crib right now. I'm just waiting on the next 24 hours. I don't think anyone would trade for me just because of the contract situation, either way Raiders have to pay me. I'm at peace..1/6

with the decision. Honestly, I felt like the writing has been on the wall recently–like within the last two to three weeks. I never felt like I had a fair shot to really compete for the job coming off the injury. At the end of the day that's business…I feel like as time 2/6

The move doesn’t really save the Raiders any money as they’ll still be stuck with $8 million dollars in dead cap over the next couple of seasons.

However, it does accomplish on important thing for the Raiders. It opens up plenty of opportunity for Zamir White, who the Raiders drafted in the 4th round this year.

Drake will now turn to looking for a new team where he’ll have an opportunity for regular carries. There aren’t many teams around the league looking for help at running back right now, but given his history of production with the Dolphins, Cardinals, and Raiders, interest is sure to develop as the season begins.