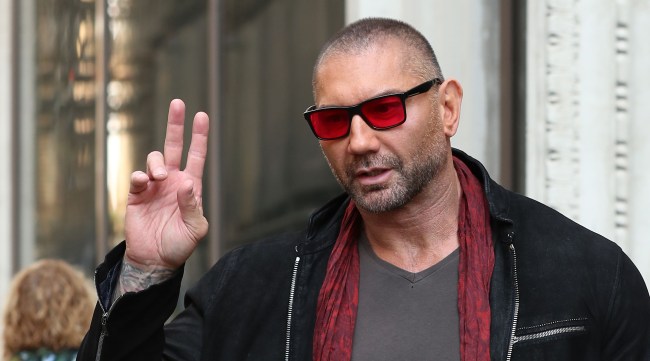 Dave Bautista faced his old buddy Triple H in a rather brutal farewell match at WrestleMania 35, even getting his nose-ring ripped out with a pair of pliers by The Game before finally succumbing to a sledghammer to the skull and a Pedigree.

Following the match the 50-year-old Bautista took to social media to thank the WWE fans for all of their support over the years.

“To all the @wwe fans across the world that gave me the opportunity to suspend your disbelief, thank you,” he wrote. “From the biggest part of my heart thank you for letting me entertain you. Tonight was my story book ending and I wanted to leave you with all I had to give. I’ll miss this theater of violence more than I can express in words but I am officially retiring from Sports Entertainment. I’m proud of what I’ve accomplished, I leave in great health, and without a doubt the show will go on. I had a hell of a run. Thank you for the journey ✌🏼#dreamchaser #wrestlemania35.”

However, before Triple H had even made his annual overblown ring entrance, Bautista entered the ring looking like a completely green jabroni, tripping over the middle rope and so became WrestleMania 35’s most enduring meme.

Titus O’Neil tripping under the ring at the Royal Rumble.

me getting out of bed tomorrow morning after staying up to watch wrestlemania pic.twitter.com/5z8AZh59ga

Batista after he tripped getting into the ring at Wrestlemania pic.twitter.com/KpJFbKvJCq

Batista been fighting Thanos so long he forgot how to get into the ring… 😳 #WrestleMania pic.twitter.com/tHCIgJGrbZ

Nothing can stop Dave Batista… except the ring rope during his entrance#WrestleMania pic.twitter.com/8s2Wc0ldFV

When you’re trying to be cool, but then you embarrass yourself in front of the whole world. Batista tripping is going to be the next meme if it isn’t already… you had one job. pic.twitter.com/q9A0dlYCGE