David Feherty Once Shat Himself Before Interviewing Tiger Woods 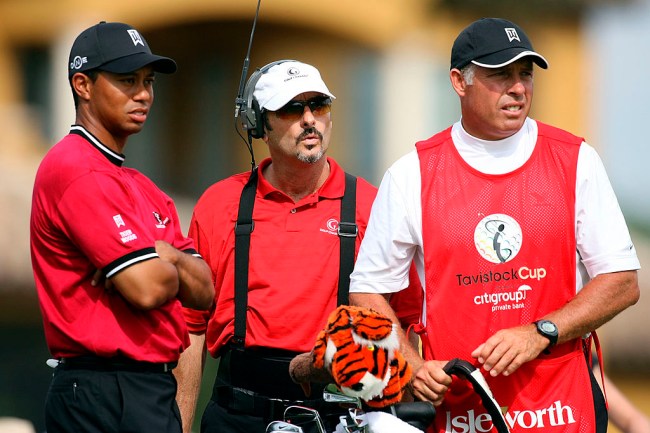 David Feherty is one of the greatest characters in the game of golf. After a successful career as a player, he’s become one of the best commentators in all of sports. He’s one of those guys players look forward to talking to and having walk with their group on Sunday afternoons.

Feherty has certainly seen and heard some things over the years, but perhaps the wildest and funniest story involves himself, some shit-stained pants and Tiger Woods.

Gary McCord joined Colt Knost and Drew Stoltz on the latest episode of the Subpar podcast and told an all-time story about the time Feherty literally shat himself prior to interviewing Woods at the Wells Fargo Championship about 10 years ago.

It turns out that Feherty was a prankster on the broadcast’s hot mic during commercial breaks and would sometimes take the mic and fart into it. Well, on that day, the fart turned out to be a bit more than a fart, according to GOLF.

“So Lance goes, ‘David, I want you to stay down there and get an interview from Tiger.’ He stops, slumps his shoulders and walks back to Tiger. Now, the cameraman locks the camera on the three guys. We’ve got Tiger in the middle, we’ve got Stevie (Williams, Tiger’s longtime caddie) over here, who’s at best 1 and 1A (with Feherty) as far as flatulence, and we’ve got (Feherty) over here, microphone in his hands.”

It’s pretty clear that we’re talking about a legitimate shit yourself moment here because Woods immediately picked up on the smell. Hats off to Feherty for owning it though and turning to the best golfer on the planet announcing that he shat himself on fifteen.

“All of a sudden, you see Tiger (sniffing). He turns to Stevie and he goes, ‘you didn’t!’ And Stevie goes, ‘I didn’t do it!’ He turns to David, and as soon as he looks at David, David goes, ‘I s— myself on fifteen.’ Tiger jumped up in the air!”

“David goes to put the mic in Tiger’s (face) and (he’s) running—he’s getting away from it. So David’s trying to get the mic, and Tiger’s running that way because the stench is so bad. It was hilarious to watch.”

It’s pretty awesome that McCord decided to share this story, at least for listeners, he may get a phone call from Feherty about it, but if we’re being honest this just adds to the legendary tale of the one and only Feherty.