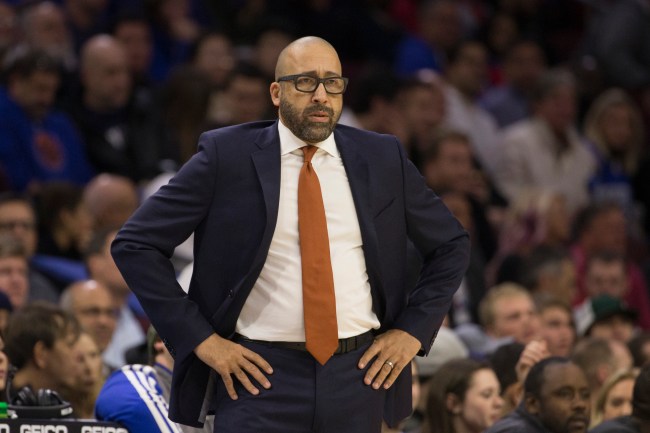 Things are not great for head coach David Fizdale who’s forced to turn this team around somehow with Kristaps Porzingis out indefinitely. So what does the coach do? He turns to stories of blood, urine, and poop in order to inspire.

Fizdale told this story about his ‘welcome to New York’ moment of breaking up a dog fight, busting ass in the ice, and rolling around in excrement on Monday’s Room B show on the MSG network. The story starts at about the 10:25 mark of this video and this clip *should* start at this point. If it doesn’t, you can just jump ahead (transcript of the story below as well):

Here’s a transcript from Deadspin of that incredibly inspiring story from David Fizdale who really seems keen on telling everyone he’s just a ‘typical West Coast dude’ and a ‘soft West Coast dude’…Bro, we get it, you’re from the West Coast.

“So I’m laying on the grass—I told this story to the team just to kinda give them a laugh and a boost—I’m laying in dog poop and pee in the yard, in ice, and I’m bleeding, and I just start laughing, on my back. Welcome to New York City, and get your butt up. And so that was the message to the team, is, ‘hey, we’re getting punched, and that’s okay, you young dudes, we’re all gonna go through this together, but we’re gonna get up together.’” (via)

Everything can be a teaching moment. Even rolling around in dog poop.

It occurred to David Fizdale, even as he lay bloody amid poop and pee, that he can turn this into a teaching moment for the Knicks https://t.co/DN6csHGQ9y