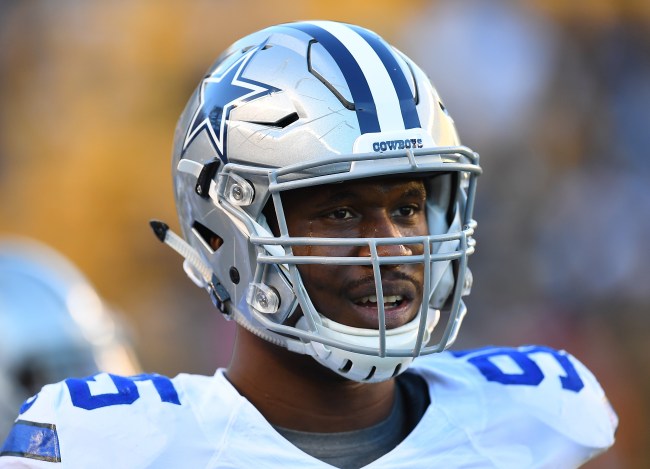 David Irving was scheduled to be an NFL free agent this offseason after playing his first four seasons with the Dallas Cowboys, with the defensive end racking up 12.5 sacks after being an undrafted player out of Iowa State. Things changed for him a couple of weeks ago, though, because Irving posted an Instagram Live video of him smoking a blunt to announce that he was quitting pro football because he didn’t agree with the league’s rules against marijuana.

Stating that he felt more comfortable and safer taking weed to help his injuries — especially the mental ones caused by head-to-head collisions — David Irving made a bold move to walk away from the NFL to stand by what he believes in. More power to him, because that’s not an easy decision.

However, talking to USA Today Sports‘ Jori Epstein the other day about his move to quit football, David Irving — who has no regrets from walking away — claims that Dallas Cowboys head coach Jason Garrett actually encouraged him to leave the league. Here’s what Irving had to say, per Bleacher Report.

“He told me I should just quit, smoke all the weed I want, the team didn’t need me,” Irving told USA Today Sports‘ Jori Epstein on Thursday. “I’m a distraction to the team. He views marijuana as a drug, whereas I view it as a medicine. It’s not a good situation.”

After being suspended indefinitely by the league on March 1 for violating the NFL’s substance-abuse policy, David Irving was already going to have to miss games had he not retired. The defensive end was also banned four games in both 2017 for PEDs and in 2018 for substance abuse.

Due to those prior suspensions — and the new one which would have been in place for David Irving — it seems Garrett just told him to do what he wants to do without punishment. Irving added that Jason Garrett had grown tired of the off-the-field problems, but that Dallas Cowboys owner Jerry Jones was a bit more supportive.

“Basically, Jerry, he is supportive of me,” Irving added, per Epstein. “He understands my situation and what I was dealing with. Our hands were pretty much tied. His hands were tied.”

David Irving also told Jori Epstein in the USA Today Sports interview that he had been diagnosed with manic depression, borderline schizophrenia, post-traumatic stress disorder and bipolar disorder, which he attributes to concussions from his time in the NFL. Those are all serious mental health conditions, so Irving seems to be taking the right path for himself to prevent any further damage.

Whether Jason Garrett did or didn’t say these exact words is neither here nor there. At the end of the day, it seems as it David Irving’s happy with his decision and now the Cowboys don’t need to bother with the player’s off-the-field issues, so it’s a win-win for both.