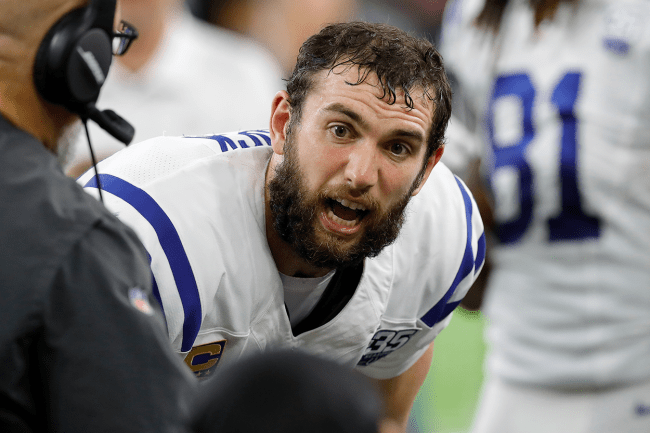 Andrew Luck is one of the greatest enigmas in the history of football and in sports. After being drafted No. 1 overall in 2012, the four-time Pro Bowler who broke the NFL record for most passing yards by a rookie suddenly retired at 29 years old after just seven years in the league.

Since stepping away from football prior to the 2019 season, Luck has been nearly nonexistent. He does not do media appearances and mostly keeps to himself.

When Luck showed up at the 2022 College Football Playoff National Championship and offered some wholesome advice on ESPN, it was a big deal. Fans were delighted to see him.

Luck’s career was plagued by injury, which ultimately led him to retire, but he had just won the NFL’s Comeback Player of the Year Award in his final year. At only 32 years old, if Luck had kept playing, there is no telling how good the Colts could be— rather than dealing with three years of trying to find his replacement in Jacoby Brissett, Philip Rivers and now Matt Ryan.

An inside look at Luck’s post-NFL life sounds awesome, so it doesn’t sound like he is missing the game all too much, but it still begs the questions “what if?” and “why?”

Why did Andrew Luck, the greatest quarterback prospect of his generation, walk away from football before turning 30?

In an effort to find answers to those questions, The Athletic’s Zak Keefer recently dropped a six-part podcast series about Luck. It tells his story in a way that you’ve never heard it before and gives some tremendous insight.

Stanford head football coach David Shaw is one of the important people featured in the podcast. He served as the Cardinal’s offensive coordinator under Jim Harbaugh while Luck was in school and watched him blossom into the Heisman Trophy runner-up.

Shaw knew that Luck was special, as did everybody, but he does not think that he was set up for success in the NFL. He prefaced his statement, however, by saying that it was a rather complicated topic.

“From your angle, did the Colts build it the right way around Andrew,” asked Keefer.

“This is a lot for me cause I’m a college head football coach,” Shaw responded. “But that’s the most loaded question that I’ve ever been asked.”

That didn’t stop him from answering Keefer’s question.

“The answer is absolutely not,” Shaw said.

Although it was only two words, Shaw’s answer speaks wonders. He does not think that Indianapolis built around the quarterback he helped develop into the first overall NFL Draft pick.

Here is the snippet of Keefer and Shaw’s discussion, as well as some insight and background into Keefer’s podcast series:

"Not just a unique character, but one of the most unique stories we've had in the NFL."#Colts reporter @zkeefer previews "Luck" — a six-episode podcast about the star QB who retired at age 29 🏈 pic.twitter.com/JAzqkbe1Rp