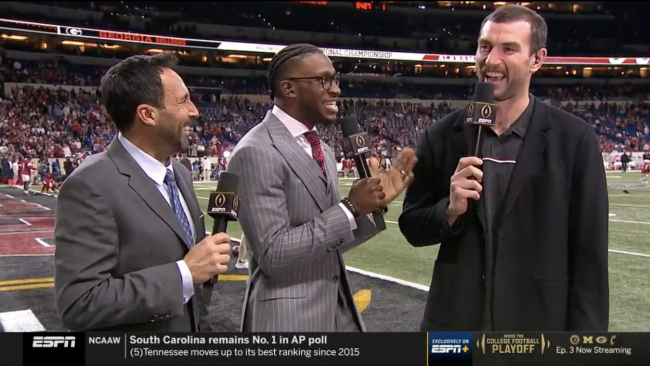 Prior to the College Football Playoff National Championship, ESPN had Andrew Luck on the broadcast to talk about the keys to the game. Not only did he look very skinny, but he had hilariously obvious advice for both teams.

Luck finished second in Heisman Trophy voting to Robert Griffin III in 2011. After season’s end, he went to the Colts with the first-overall pick in the NFL Draft. With the second overall pick, the Washington Football Team selected RGIII.

The two of them reunited on the sideline in Indianapolis on Monday. Lucas Oil Stadium hosted the National Championship game and RGIII is part of ESPN’s broadcast team after being unsigned in the 2021 offseason.

Luck, who was recently inducted into the College Football Hall of Fame, joined the broadcast crew prior to the game. The 32-year-old was 240 pounds during his playing days and looked looked like he was closer to 200 pounds on Monday. He also rocked a very bushy mustache.

Andrew Luck in the house for the #NationalChampionship 🙌 @CollegeGameDay pic.twitter.com/lVNYj9bDFN

Joe Tessitore asked both RGIII and Luck what advice they would give to the players on Alabama and Georgia. Luck went first and gave the most obvious advice.

It was a hilarious, extremely wholesome moment.

RGIII offered his thoughts, but quickly changed the subject. He asked Luck the question we all want the answer to— What has Luck been up to since retiring 2018?

Andrew Luck and @RGIII give advice for Bryce Young and Stetson Bennett ahead of the #NationalChampionship 🤝 pic.twitter.com/IsOU2qMTu4

It was great seeing Luck back in the spotlight and it remains impossible to dislike him. Football fans reacted accordingly.

"And now, News 5 Now brings you an exclusive interview with a local man who says 30-50 feral hogs run into his yard within 3-5 minutes whenever his small kids play" pic.twitter.com/Qjh4dkl0CK

Andrew Luck and RG3 look like old high school friends that haven’t seen each other in years and one of them became a high profile M&A attorney while the other is a geology teacher and just happy as a clam. pic.twitter.com/7BGCZdUEoK

having a hard time wrapping my brain around the fact that Andrew Luck and RG3 are RETIRED pic.twitter.com/NzCB0EAS0H

I respect how Andrew Luck just enters society randomly and then goes back to the woods. https://t.co/iR8kYSp9E9

Immediately get Andrew Luck on the next season of Yellowstone or 1883. pic.twitter.com/eVS0JvRx9X

Daniel Day Lewis dives into his characters like no one else. The Andrew Luck biopic is gonna be fantastic pic.twitter.com/slEKBWMBfq

Andrew Luck on the field at Lucas Oil Stadium. Carson, nothing to worry about. pic.twitter.com/sAzYeZGHtd

Shout outs to my man Andrew Luck who is so unfazed by things that he showed up to the natty coverage wearing a wrinkled polo and clearly a PA had to throw a sport coat on him.

Also I forgot his voice sounds like someone who talks with hookah smoke in their mouth. pic.twitter.com/YgrfxAgnOe