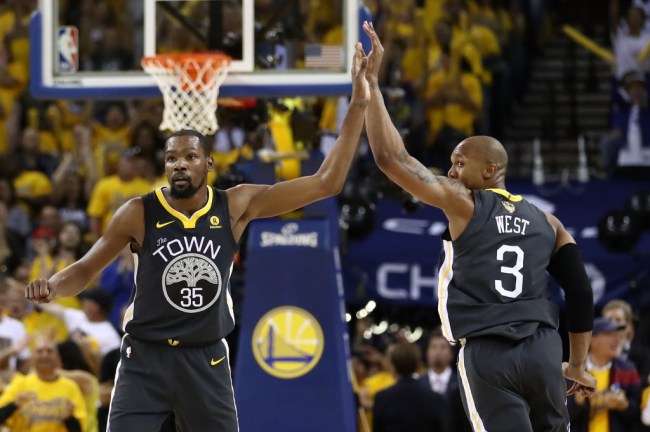 The Golden State Warriors became back-to-back champions last night after blowing out the Cleveland Cavaliers in game 4 of the NBA finals. After the game, David West dropped a bomb when he revealed to Marc Spears of the Undefeated that the Warriors went through serious internal issues behind the scenes all season.

Via Marc Spears of the Undefeated

With numerous magnum gold and black champagne bottles emptied everywhere and also unopened in a gold tub in the visiting locker room, Golden State Warriors big man David West said there was a lot to celebrate after winning the 2018 NBA championship.

“We just worked. Different guys throughout the year carried the load and helped us,” West said. “There were some things internally. When you guys find out about that s—, you’ll trip. You’ll trip. It’s a testament to the type of people these guys are, how tied we were as a group and then we were able to win it.”

While none of West’s teammates would comment on his revelation to the media, Draymond Green acknowledged that the Warriors went through a lot this season.

“It is because of what we had to go through,” Green said. “We went through so much adversity. Mentally. Injuries. Complacency. You name it. We went through it.”

None of the Warriors would elaborate on West’s comments about the personal problems. West said no loose lips was a testament to how tight the team was. Without offering a hint of detail, sources said at least two players fought through personal challenges this season.

“I think people would trip out on a lot of s—. We don’t. That is what is most important,” Green said.

It sounds like there may have some beef with some players in the locker room, maybe we’ll find about it in the offseason.