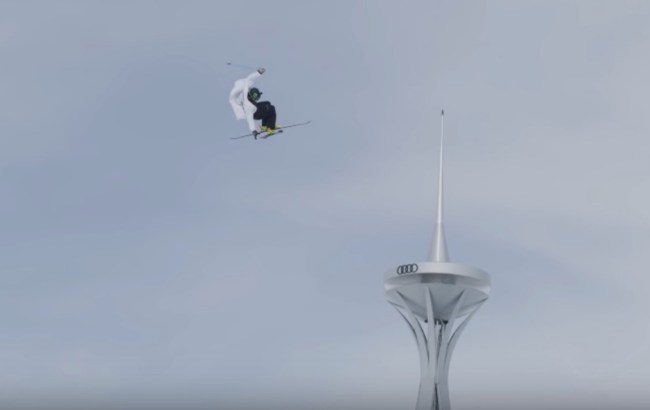 David Wise is a 2-time Olympic Gold medalist and 4-time Winter X Games gold medalist in Freestyle Skiing. The 28-year-old from Reno, Nevada also won a Gold Medal a few years back at the World Championships.

In the sport of Freestyle Skiing, there’s nothing he hasn’t accomplished, even more so now after he just set a new world record for Highest Air on a Quarterpipe to Banked Landing. David Wise dropped in with a camera on his head and flew nearly 40-feet above the quarterpipe to a measured height of 38 feet and 4 inches above the ramp.

This world record took place at the Audi Nines quarterpipe in Sölden, Austria, a location famed for this type of jump because it has a sophisticated measuring system in place that gives the skiers almost immediate feedback on how high they launched off the ramp. The previous world record was held by Simon Dumont at a height of 35-feet so this new record from David Wise demolished that by over 3-feet!

Here’s that caption from his Instagram page about the world record jump:

Worlds Highest Air- Quarterpipe to bank landing. It’s hard to describe how something like a 38.39 foot air out of a quarterpipe feature like this happens. I’ve never thought of myself as a worlds highest air chaser, but now twice in my life I’ve had the chance to hit a well build feature as fast as possible to see how high I could go. At the end of the day I just feel lucky that I get invited out to ride @audinines. The sun was shining, the landing was soft but not slushy, and I was just having the time of my life hitting a safe, well-built quarterpipe. I definitely exceeded my own expectations and I can’t thank the crew behind the scenes enough!

Big ups to David Wise for setting this world record. It’s always nice to have as many records as possible in ‘Extreme Sports‘ held by Americans. I like knowing that the rest of the world thinks our athletes are crazy as shit with no concern for their own wellbeing.

For more on this jump, you can click here to head on over to the Adventure Sports Network.