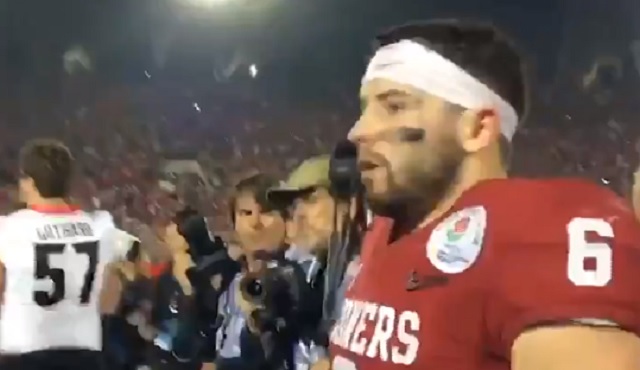 Baker Mayfield has by far been the cockiest player in college football for the past year. He’s also been the biggest trash talker on the field all season as well. Mayfield’s cocky persona was on full display on Monday when the Oklahoma Sooners played the Georgia Bulldogs at the Rose Bowl in Pasadent.

It all went down before the game even started when Mayfield annoyed several Georgia players by running routes on their side of the field during pregame warmups.

Then in the middle of the game, Mayfield taunted the Georgia bench with a throat slash gesture after the Bulldogs missed a field goal.

Baker Mayfield is out for blood pic.twitter.com/04y0lVzvql

Unfortunately for Mayfield the Sooners lost in overtime and it seemed liked Georgia’s players were happy to rub it in his face.

After the game, Georgia linebacker Davin Bellamy had some words for the Heisman winning quarterback. Here is Bellamy yelling “humble yourself” over and over again as Mayfield walked off the field.

As Baker Mayfield walked off the field, Georgia’s Bellamy yelled “Humble yourself!” at him repeatedly

We’ll have to wait and see how Mayfield’s draft stock is impacted by his attitude. While Mayfield is a great player on the field and his teammates seem to like him, many teams are going to be wary of drafting the next Johnny Manziel.