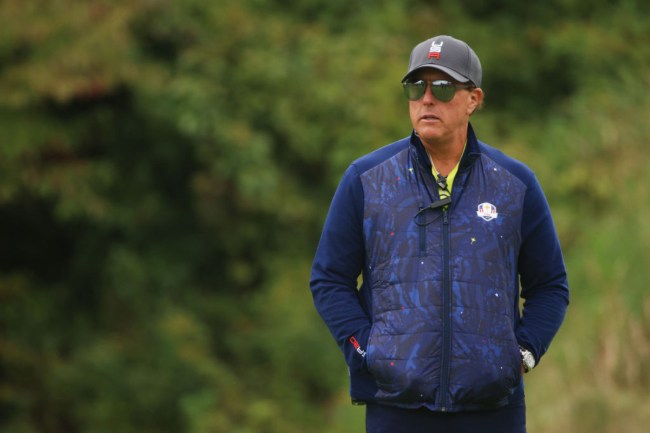 Phil Mickelson being the captain for the 2025 Ryder Cup at Bethpage Black has been a widely accepted assumption in the golf world. He’s beloved by New Yorkers and has quite the track record in Ryder Cups, but given recent developments involving Lefty, his captaincy may be given to someone else.

Davis Love III, this year’s U.S. Presidents Cup captain, hinted at that being the case ahead of this week’s RBC Heritage.

During his press conference, Love III was asked why Fred Couples had never been a Ryder Cup captain. The question was simple, but Love III’s answer was not.

“He could still be Ryder Cup captain,” Love III explained, according to Golf Digest. “We may have to fill a gap somewhere now. Our order’s kind of messed up right now. So maybe Fred would be great [for a] home game in New York.”

It doesn’t take much to read between the lines here, Love III is almost certainly referencing Mickelson here.

Mickelson’s Comments May Have Cost Him Ryder Cup Captaincy

Mickelson sent shockwaves through the golf world in February after making comments about both the PGA Tour and the breakaway Saudi Golf League during an interview with Alan Shipnuck of The Fire Pit Collective.

Mickelson said that he had enlisted three other “top players” to pay for attorneys to write the Saudi Golf League’s operating agreement. In that same interview, he called the Saudis behind the breakaway golf circuit “scary motherf–kers.”

While the “scary motherf–kers” comment was one thing, his comments about the PGA Tour were a whole different animal.

“The Tour likes to pretend it’s a democracy, but it’s really a dictatorship,” Mickelson said. “They divide and conquer.

“The concerns of the top players are very different from the guys who are lower down on the money list, but there’s a lot more of them. They use the top guys to make their own situation better, but the top guys don’t have a say.”

Bad-mouthing the PGA Tour and commissioner Jay Monahan while admitting to working with a rival golf league certainly hasn’t increased Mickelson’s stock in the eyes of golf’s traditional governing bodies.

Following his own comments, and now Love III’s, it sounds like Mickelson is a long shot to captain a Ryder Cup side anytime soon.