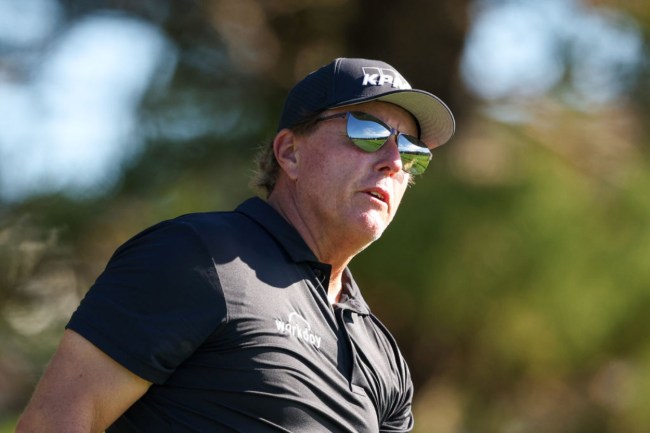 As rumors began to pick up about the Saudi Golf League months ago, you could ask any golf fan ‘Which big-name player do you think could be the first to go?’ and 100% of them would say Phil Mickelson.

Mickelson may be on the other side of 50, but he’s still one of the most beloved golfers to ever play the game. It’s also no secret that the man really enjoys green-colored paper, and there’s going to be plenty of that with the SGL. Guaranteed money, and lots of it, and a limited schedule for someone past his prime like Mickelson is extremely intriguing.

Having said that, it should come as no surprise that Mickelson has been involved behind the scenes of the Saudi Golf League.

Alan Shipnuck of The Fire Pit Collective was able to talk with a very candid Mickelson for his forthcoming book and Lefty delivered some scathing quotes.

First and foremost, Mickelson said that he had enlisted three other “top players” to pay for attorneys to write the SGL’s operating agreement. It didn’t take him long to realize that the Saudis behind the SGL were some “scary motherf–kers.”

“They’re scary motherfuckers to get involved with,” Mickelson said. “We know they killed [Washington Post reporter and U.S. resident Jamal] Khashoggi and have a horrible record on human rights. They execute people over there for being gay.”

“Knowing all of this, why would I even consider it? Because this is a once-in-a-lifetime opportunity to reshape how the PGA Tour operates.”

“They’ve been able to get by with manipulative, coercive, strong-arm tactics because we, the players, had no recourse.”

“As nice a guy as [PGA Tour commissioner Jay Monahan] comes across as, unless you have leverage, he won’t do what’s right. And the Saudi money has finally given us that leverage. I’m not sure I even want [the SGL] to succeed, but just the idea of it is allowing us to get things done with the [PGA] Tour.”

What a spin zone. Mickelson calls the Saudis “scary motherf–kers” yet is still very much intrigued by the thought of working with them, but not for the money he’ll be making though, just because this would be an opportunity to change how the PGA Tour operates.

Mickelson owes his career to the PGA Tour so it’s understandable he’s looking out for its wellbeing, but again, he’s 51-years-old. His future actually playing on the PGA Tour is a small, small window.

While Mickelson took a jab at commissioner Jay Monahan, he threw a haymaker at the Tour as a whole later on in the interview.

“The Tour likes to pretend it’s a democracy, but it’s really a dictatorship,” Mickelson said. “They divide and conquer.

“The concerns of the top players are very different from the guys who are lower down on the money list, but there’s a lot more of them. They use the top guys to make their own situation better, but the top guys don’t have a say.”

Mickelson’s comments here echo what he recently said about the Tour being “obnoxious” and “greedy.”

Monahan has made it very, very clear that anyone player who signs with the SGL would be banned for life by the PGA Tour.

Mickelson doesn’t seem to care too much about that, because remember, he’s doing this for the betterment of the Tour itself.