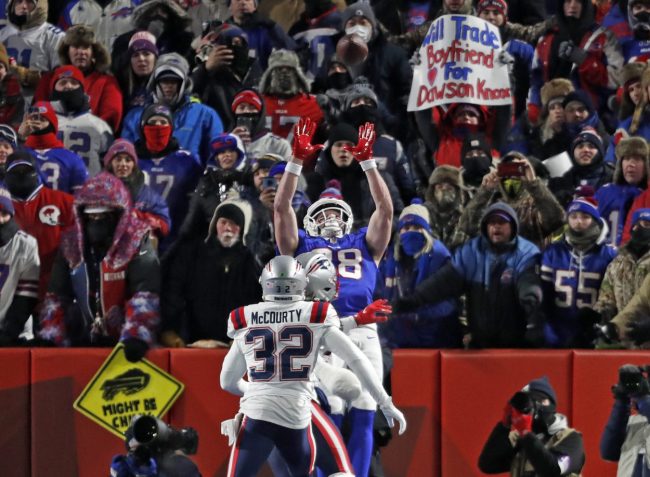 Dawson Knox scored two more touchdowns during the AFC Wild Card game against the Patriots than he did in his entire collegiate career. The Buffalo tight end has become an increasingly valuable asset in the Bills offense and found pay dirt twice on Saturday.

His first touchdown of the evening came on the first scoring drive of what became a 47-17 blowout win. It was an extremely acrobatic catch to put Buffalo on the board first.

The on-field angle of the catch is absolutely insane.

Although the catch was spectacular, it gets even more impressive with Josh Allen’s honest admission. After the game, Allen spoke with the media and admitted that after getting flushed out of the pocket, he did not see anyone open and tried to throw the ball away.

Knox was not his intended target. He was not throwing the ball to Knox. Allen was trying to float the ball out of the back of the end zone and set up a 3rd-and-goal.

Knox had different plans and went up and pulled it down for the touchdown. Later in the first quarter, he found the end zone for the second time.

Knox’s two first quarter scores were two more than he scored during his four years in Oxford. The Ole Miss staff, particularly offensive coordinator Phil Longo, completely failed to use Knox as a weapon and he never caught a touchdown with the Rebels.

It was a perfect example of gross negligence by an offensive coaching staff and Knox is proving them to look very silly. He is making touchdowns out of throw aways in the NFL Playoffs. Crazy.