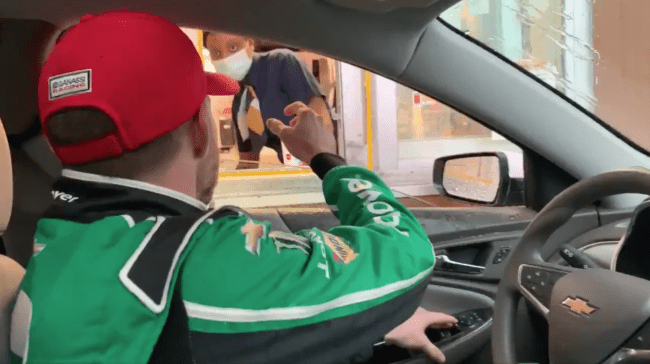 NASCAR’s 2021 season kicked off today with the Daytona 500, but it didn’t last long before it had to enter a weather delay due to a thunderstorm in the area. The 63rd running of the Great American Race began with a huge crash on the 15th lap that knocked out nearly half of the field and forced a red flag stoppage. While the drivers received medical clearance (everyone was okay), debris was cleared up and the cars were removed from the track, lightning struck in the area and a slight drizzle began to fall. The skies opened up shortly thereafter and a steady rain placed the race under a weather delay that would seemingly last awhile.

Delays are brutal for everyone involved, but drivers in particular need to stay ready to return to the track at any moment. That includes avoiding an empty stomach. As a result, a couple of the drivers hopped in their day-to-day vehicles and went out for food. Chase Briscoe’s wife Marissa documented the journey for dinner and showed her husband, racing suit and all, pulling up to a Panda Express drive-thru at 4:35 p.m. EST in his Ford pickup truck.

About two hours later, Ross Chastain got in his Chevrolet SUV and rolled through McDonald’s for dinner. He was also wearing his fire suit.

.@RossChastain out here in the drive thru ordering @McDonalds for the entire 42 team during this rain delay 😂🍟#NASCAR | #DAYTONA500 pic.twitter.com/Gt3Z47leJs

It was definitely a different kind of pit stop for both drivers and the internet had plenty of jokes about the food selection, considering that they are scheduled to be behind the wheel for 185 more laps without stoppage. I also question the restaurant choices. I know time is everything, but a quick google search shows a Chipotle, Waffle House, Chick-Fil-A and Outback Steakhouse (among many other better selections) within eight (8!!) minutes of the track. 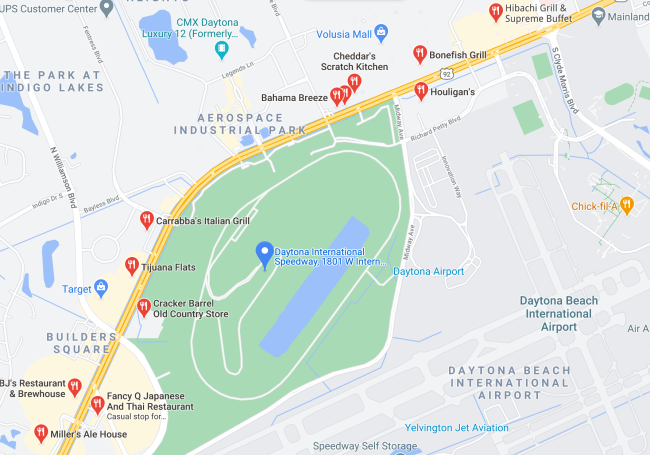 Also, I wonder why both Briscoe and Chastain drove themselves. It seems like someone else could have gone and picked up dinner for them. It doesn’t look like the Daytona 500 will resume on Sunday, so any ramifications from their nourishment decisions will not hinder their performance.