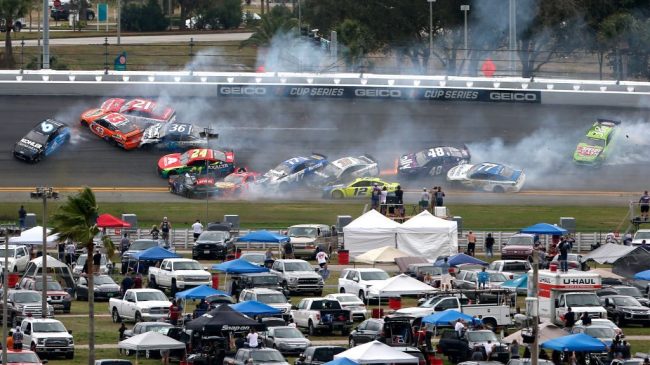 It took only 14 laps for “The Big One” to happen at the Daytona 500 on Sunday. The massive, multi-car wreck is pretty much guaranteed to happen every year at Daytona International Speedway, but it usually doesn’t go down until the latter half of the 200-lap race.

This year, however, it came early and with vengeance.

One small move triggered a massive pile up that took out just under half of the pack. Kyle Busch in the No. 18 car seemed to give his teammate Christopher Bell a small push in the No. 20 car. The push was a little bit too much and Bell made contact with the driver right in front of him, Aric Almirola’s No. 10 car, sending him into Alex Bowman in the No. 48 car. Both Almirola and Bowman slammed into the wall and bounced off into the cars behind them, causing the chaotic crash.

.@NASCARONFOX takes a closer look at what caused this multi-car accident. #DAYTONA500 pic.twitter.com/sS8wJkt9La

Fortunately, there were no injuries, but at least six of the drivers involved are listed as out for the rest of the race— which is in a weather delay after lightning and rain entered the area shortly after the wreck. Bubba Wallace, who earned the sixth spot in qualifying, failed two inspections prior to the race and was forced to start at the back of the group. He and his team’s blunder ended up being a significant positive, as he likely would have been involved in the crash.

Byron, who was not so lucky driving the No. 24 car, was on two wheels at one point after being hit from the side. As he slid toward the grass, Ryan Preece in the No. 37 Chevrolet, made a masterful move to escape getting caught up in the carnage.

This moment changes everything. #DAYTONA500 pic.twitter.com/tg6twCeq0L

Afterward, Almirola said that he is “fine” but was understandably disappointed.

“We were just getting pushed too hard too early,” he said. “It’s a long, long race. Man, we were in a fine position, just sitting there riding around in the top two, three. And [Bell] just came with a big run and hit me really hard in a bad spot, and it turned me to the right and tore up our race car and ended our Daytona 500 way too early.”

Bowman, the pole-sitter, was collateral damage in the early wreck and was bummed because of how fast his car was running. Newman, who suffered a horrific crash in last year’s race, was caught behind the chaos and had his return to Daytona ruined early on.

While we wait under this red flag, take a look at @RyanJNewman's view of this most recent incident during Stage 1. #DAYTONA500 pic.twitter.com/Lm0r4nmLyQ

The race was red-flagged almost immediately after the pile up and the weather report does not look positive for a continuation on Sunday.