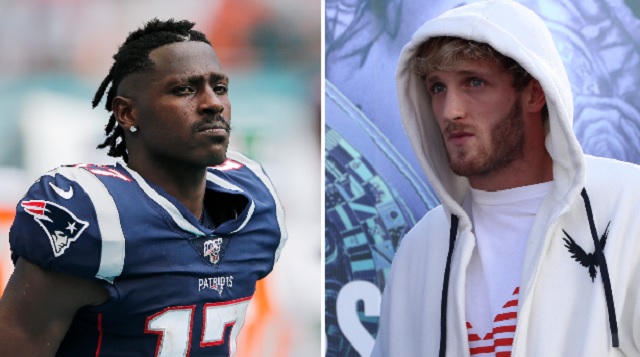 According to a report from NY Post’s Andrew Marchand, DAZN has reportedly offered Brown $1 million-plus incentives to box Paul.

DAZN is in agreement with YouTube star Logan Paul for a fight that would pit him against former NFL Pro Bowler Antonio Brown, The Post has learned.

If Brown agrees to what sources said is an offer in excess of $1 million and maybe multiple millions plus incentives, then DAZN hopes to schedule the fight for April in Las Vegas around the same time as the NFL Draft.

This would be the biggest fight of 2020,” Paul, who has 20 million YouTube subscribers, told The Post in a statement through DAZN. “I’m ready to sign my contract and punch Antonio Brown in the face on behalf of his baby mama. Right now, we’re waiting on him, but I’m not sure if he actually wants to fight or if he’s teasing it for clout.”

Apparently, Brown is already training for the fight and has hired professional boxer Eromosele Albert to help him get ready for Paul.

Antonio Brown getting some work in on the pads 👀🥊

The man holding the mitts is Brown’s newly hired trainer in former two-time Nigerian Olympian and professional boxer Eromosele Albert, who amassed a record of 24-6-1 and 12 KOs before retiring in 2011 as a middleweight.

Antonio Brown just started boxing and we just started training together. Yes, he is serious about the fight,” Albert said in an interview with BoxingScene.com. “We’re starting a training camp now. He’s a natural. He’s an athlete. It’s not a big transition. He’s going to catch up really quick. He needs a lot of work to get done, to correct all of his mistakes. We have three months to get ready for the fight. That’s enough time. He’s in shape already. We just have to work on his technique, head movement and defense — and that should be it for him to be ready.”

Paul seems eager to get in the ring with AB.

Antonio Brown needs this fight now more than ever. i know the official offer was sent to him today, make it happen @AB84

It’s unclear whether $1 million would be enough to get Brown into the ring considering he makes a lot more than that playing football.