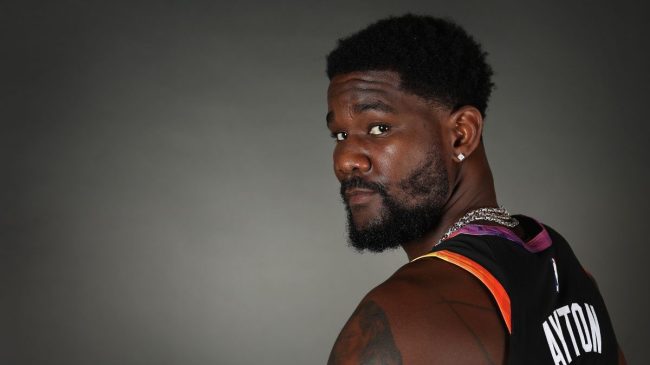 The last time we saw Deandre Ayton and Monty Williams on the same NBA court the Phoenix Suns were getting blown out by the Dallas Mavericks in the Western Conference semifinals.

Williams subbed Ayton out of the game in the third quarter. The Suns trailed the Mavs 70-32 and the Phoenix big man never came back into the contest. That sparked a very public argument between the two that apparently has not been resolved.

Ayton then entered the NBA offseason as a restricted free agent after Phoenix refused to offer him a rookie max extension. After no trade developed for Kevin Durant, the Indiana Pacers signed Ayton to a four-year, $135 million offer sheet that the Suns then matched.

That brought Ayton back to Phoenix at least until January 15, which is the first date he can officially be traded. Ayton and Williams will have to get on the same page until then. And it doesn’t sound like that process is off to a great start.

Ayton reported back to the Phoenix Suns’ facility on Monday for the first day of the 2022-23 NBA training camps. He was asked about his new contract with the team that took him No. 1 overall in the 2018 NBA Draft and didn’t sound overly thrilled.

Deandre Ayton seems thrilled to be back in Phoenix pic.twitter.com/Mn4Lkh6pP5

Media members then asked Ayton on Tuesday if he had spoken to Williams about their argument. His answer was telling.

Deandre Ayton said he and Monty Williams have not spoken about their sideline incident in Game 7: pic.twitter.com/Z9rHYHr5yX

The follow up question and answer may be even more demoralizing for Phoenix fans.

Asked what he’d want to say to Monty, he replied, “I can show him better than I can tell him.”

Ayton’s answers and body language make it appear he doesn’t seem too happy to be back in a Suns jersey. But for at least the next three months he has no other options.

Either Williams and Ayton work out their differences, or the vibes in Phoenix could be worse than they already are.