Fans Blast Robert Sarver’s Statement After He Reveals His Plans To Sell The Suns, Mercury 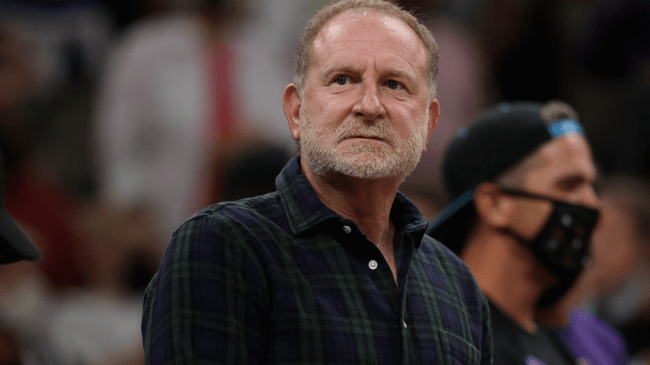 Phoenix Suns and Mercury owner Robert Sarver has come under fire of late due to racial and misogynistic misconduct.

In October of 2021, reports began to surface that the NBA was bracing itself for a massive ESPN report accusing Sarver of racism, sexism, and sexual harassment in a series of incidents.

A Suns co-owner said about Sarver, “The level of misogyny and racism is beyond the pale. It’s embarrassing as an owner,” while an employee who’d turned in her letter of resignation with the organization called the work environment “intolerable and toxic.”

Now, he is facing the consequence of those actions.

Following a lengthy investigation by the NBA, Sarver was handed a one-year suspension. Many, however, believed this was too lenient a punishment following the incidents reported, and that outcry has now led to Sarver’s selling the franchises.

Sarver and his PR team released a statement Wednesday about his plans to sell the Suns and Mercury.

Words that I deeply regret now overshadow nearly two decades of building organizations that brought people together – and strengthened the Phoenix area – through the unifying power of professional men’s and women’s basketball.

As a man of faith, I believe in atonement and the path to forgiveness. I expected that the commissioner’s one-year suspension would provide the time for me to focus, make amends and remove my personal controversy from the teams that I and so many fans love.

But in our current unforgiving climate, it has become painfully clear that that is no longer possible – that whatever good I have done, or could still do, is outweighed by things I have said in the past. For those reasons, I am beginning the process of seeking buyers for the Suns and Mercury.

I do not want to be a distraction to these two teams and the fine people who work so hard to bring the joy and excitement of basketball to fans around the world. I want what’s best for these two organizations, the players, the employees, the fans, the community, my fellow owners, the NBA and the WNBA. This is the best course of action for everyone.

In the meantime, I will continue to work on becoming a better person, and continuing to support the community in meaningful ways. Thank you for continuing to root for the Suns and the Mercury, embracing the power that sports has to bring us together.

Many fans and media are not necessarily happy with the closing statement from Sarver.

Some took note of Sarver’s interesting choice of words in the release, which somehow make it seem that he’s the victim in all of this.

“But in our current unforgiving climate… whatever good I have done is outweighed by things I have said in the past.”

One fan wrote, “But in our current unforgiving climate, it has become painfully clear that it is no longer acceptable to be a racist, misogynistic glob,” while another commented, “dude’s really blaming cancel culture.”

"But in our current unforgiving climate, it has become painfully clear that it is no longer acceptable to be a racist, misogynistic glob."

Other fans noted that even after all of this, he will still become a billionaire for being outed as prejudiced. This NBA viewer posted, “When f—ing up is profitable,” in response to seeing Sarver’s statement about selling the Suns and Mercury.

When fucking up is profitable 📈…….

It will be interesting to see where the organizations go after Sarver inevitably moves on. Many believe that Bob Iger could be in line to own the Suns next, with notable NBA writer Sam Amico posting the following on social media.

Bob Iger, the former Disney CEO and reported pal of Adam Silver, could be next in line to own Suns. Iger had an interest before, but was shot down. In an interesting twist, Disney owns ESPN, which uncovered the Sarver story.

An interesting development with Iger being linked to both Disney/ESPN, who broke the Sarver story, and NBA commissioner Adam Silver.

We’ll see how it all plays out in Phoenix over the next few months.