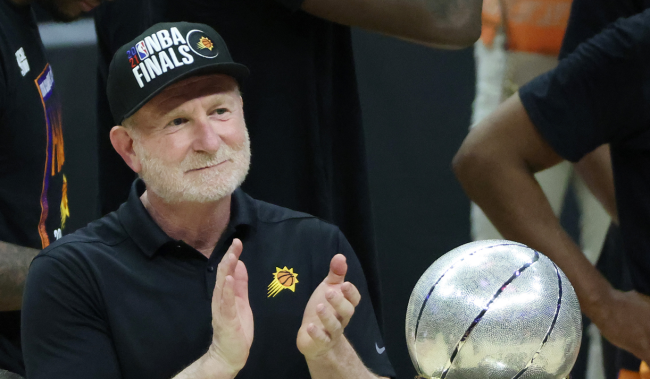 The NBA announced on Tuesday that after a lengthy and very thorough investigation, Phoenix Suns and Mercury owner Robert Sarver has been suspended for one year and fined $10 million over misconduct within his teams’ workplace.

In October of 2021, reports began to surface that the NBA was bracing itself for a massive ESPN report accusing Sarver of racism, sexism, and sexual harassment in a series of incidents.

At that time, the Phoenix Suns denied that the allegations made in the forthcoming ESPN story would be true. The Suns were dead wrong.

The ESPN report ended up detailing Robert Sarver’s alleged racism and misogyny, complete with quotes from a Suns co-owner and a former Suns basketball executive.

“The level of misogyny and racism is beyond the pale,” the Suns co-owner said about Sarver. “It’s embarrassing as an owner.”

“There’s literally nothing you could tell me about him from a misogynistic or race standpoint that would surprise me,” said the former Suns basketball executive.

This past June, even more details came out when the resignation letter of former Suns employee Melissa Fender Panagiotakopoulos became public in which she stated her job had become “intolerable and toxic.”

In a statement announcing Robert Sarver’s punishment, the NBA said that its independent investigation involved interviews with 320 individuals and the evaluation of more than 80,000 documents.

“The independent investigation found that Mr. Sarver ‘engaged in conduct that clearly violated common workplace standards, as reflected in team and League rules and policies,'” the NBA’s statement read. “‘This conduct included the use of racially insensitive language; unequal treatment of female employees; sex-related statements and conduct; and harsh treatment of employees that on occasion constituted bullying.'”

The first key finding to come out of the independent investigation was that Sarver “repeated the N-word multiple times when recounting the statements of others.”

The Suns’ owner also “engaged in demeaning and harsh treatment of employees, including by yelling and cursing at them.”

“Among other things, the investigation found instances of racial insensitivity, mistreatment of female employees, inappropriate commentary related to sex or sexual orientation, and disrespectful communications,” the NBA’s statement continued. “The investigation also concluded that the Suns’ Human Resources function was historically ineffective and not a trusted resource for employees who were subjected to acts of improper workplace conduct.”

The full report by the law firm of Wachtell, Lipton, Rosen & Katz can be viewed here.

As part of his punishment, Sarver must also “complete a training program focused on respect and appropriate conduct in the workplace.” The Suns/Mercury organization must also “fulfill a series of requirements for workplace improvements set forth and monitored by the NBA.”

All that and he's only getting fined 10 million??? pic.twitter.com/3Eid3BfgP9

Umm if a regular employee did all this, they would not be suspended.. fired for sure. How is he still able and allowed to own a team if he has done all these egregious things. Unbelievable.

Former Los Angeles Clippers owner Donald Sterling was banned from the NBA for life after private recordings of him making racist comments were made public in 2014.

It took them almost a year to reach this conclusion

And yes, there were also a lot of jokes.