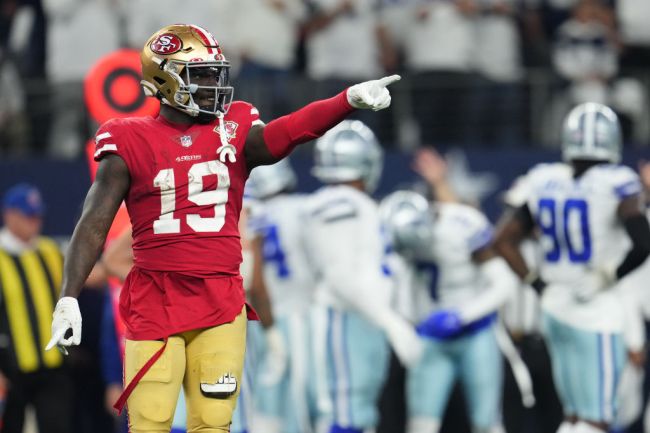 When Deebo Samuel signed his contract extension with the San Francisco 49ers over the weekend, it took care of one of the few remaining loose ends from the NFL’s offseason.

Deebo and the 49ers went through a lengthy saga of speculation following Deebo’s trade request. Many didn’t expect Deebo to be a member of the 49ers by the time the NFL Draft concluded, but he wouldn’t join Davante Adams, Tyreek Hill, AJ Brown, and Hollywood Brown as receivers traded this offseason in pursuit of a large contract extension.

Before Deebo and the 49ers finally got a deal done, there were plenty of rumors that circulated about the situation, including one that indicated Samuel might not be happy with the way the 49ers used him last season.

Today he shot down that rumor, revealing that he still loves his role as the 49ers’ “wide back”.

Despite the offseason rumors, Deebo still loves the “wide back” role pic.twitter.com/fUX1NXJUEW

Last season, Deebo became a truly unique weapon for the 49ers. As they struggled with injuries at running back, the team began lining him up in the backfield for carries. That decision led to Deebo carrying the ball 59 times during the 2021 season for 365 yards and 8 touchdowns.

It seems the reports of Deebo not wanting to run the ball anymore were overblown and we can expect to continue to serve as the league’s top “wide back”.