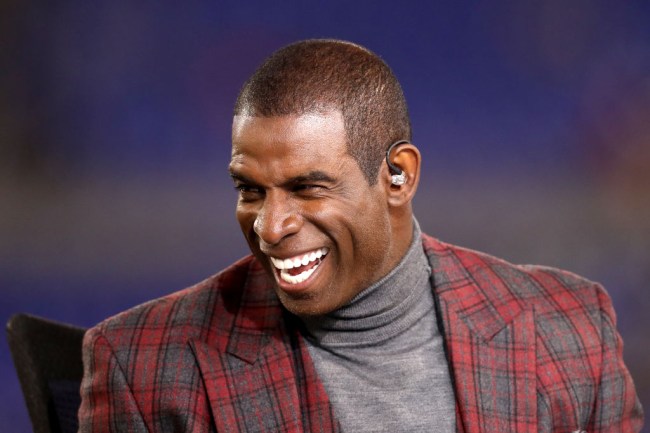 Is Deion Sanders considering stepping away from the limelight to coach football at the college level? According to a report for 247 Sports, Sanders has interest in joining Willie Taggart’s coaching staff as a defensive backs coach.

As far-fetched as it sounds, a source with knowledge says Sanders has a serious interest in coaching at the college level. Sanders has coached at the high school level in Texas, he also has worked with the best players in the country each year at the Under Armour All-America Game.

At this point, everything between Taggart and Sanders is still in the early discussion phase, but we can confirm there is mutual interest on both sides.

Sanders and Taggart posted a picture together today before FSU’s bowl game and Noles fans started to freak out a bit at the possibility of Sanders returning to his Alma mater.

It was great catching up with the G.O.A.T. @DeionSanders 😳😳😳 Go Noles!🍢🍢 #DoSomething pic.twitter.com/l8cTG5OWyL

Need @DeionSanders to be in the staff no doubt, would really bring the swag back to tally

Update: Sanders was asked about the coaching rumors during FSU’s bowl game today and this is what he said.

While Sanders would do an amazing job recruiting for the school I highly doubt he would leave his cushy multi-million dollar job as an NFL analyst to become a lowly DBs coach on the sideline.