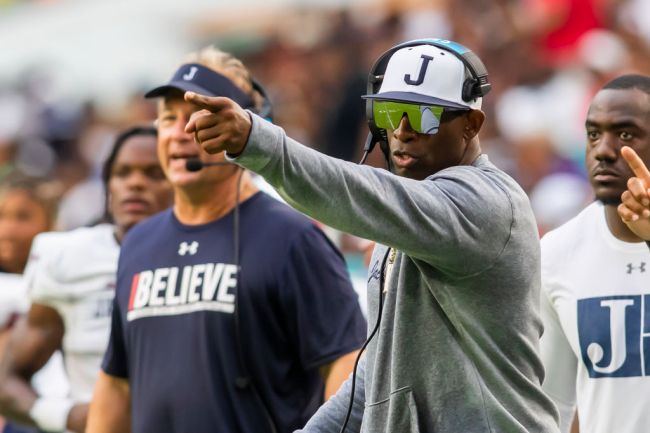 Deion Sanders is changing the landscape of college football. The 54-year-old NFL Hall of Famer took the head coaching job at Jackson State ahead of last season in an unprecedented move.

As Coach Prime tries to bring the Tigers to relevance on the national level, one of his goals is to help elevate the conversation around and exposure of HBCU football. As part of his efforts, Sanders is pushing to add players’ names to the backs of their jerseys.

After the team’s first game of the season, a 7-6 win over Florida A&M, he discussed one of his team’s top performers, Aubrey Miller Jr., and pointed to the name on his jersey.

Coach Prime continued on to speak about how the little things, like names on jerseys, is the stuff that is taken for granted. He wants a player who “worked his butt off” to “at least [have] his darn name on the back of his jersey.”

While adding names might seem like a small change, it could have a massive impact for the athletes, who are now eligible to profit from their names, images and likenesses. Increasing a player’s recognizability on the field would directly increase their marketability off of the field.

Sanders, who has a net worth of around $40 million, offered to pay for the entire Southwestern Athletic Conference to add players’ names to their uniforms. He cracked that the extra stitching would cost “an extra $5 per jersey” and is personally willing to see that it happens.

“I’ll take care of it for the whole SWAC if they do it,” Sanders said to SMAC Entertainment CEO Constance Schwartz-Morini, his manager.

“Constance will help,” he then added. “You have already blessed the whole team with suits.”

His comment comes in reference to his most recent effort to increase the spotlight on overlooked and underfunded HBCU football programs. Sanders and Schwartz-Morini partnered with Michael Strahan to help outfit the Jackson State players and coaching staff with custom suits ahead of their season opener.

What Sanders is doing for HBCU programs is unprecedented and it will be interesting to see whether his voice carries enough to see the changes that he would like to make happen.