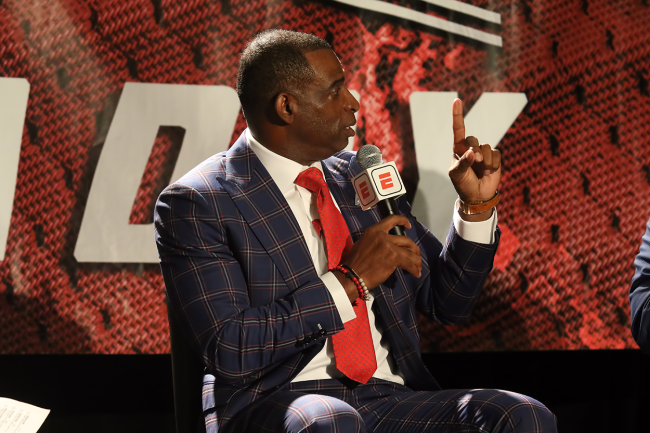 Over the course of the past two years, only one player from a historically black college and university (HBU) had his name called during the NFL Draft. Deion Sanders thinks that is set to change this year.

Last year, there was not a single HBCU athlete drafted into the NFL. A large part of that was because of COVID-19, when fall seasons were cancelled and the pre-draft process did not include the NFL Combine or many in-person visits.

In 2020, there was only one player drafted. In 2019, four players were selected, including Alabama State tackle Tytus Howard in the first round. A year prior, three players were taken, including All-Pro linebacker Darius Leonard from South Carolina State University.

While the lack of selections from HBCUs in 2021 came under unusual circumstances, it was a shock. There is a lot of talent on the FCS level, particularly within HBCUs, and this year’s draft should see more of those players hear their names called.

In fact, Deion Sanders is calling for a record number of HBCU prospects to hear their names called in the 2022 NFL Draft.

Sanders, currently in his Coach Prime era, is currently the head coach at Jackson State. He has hopes that at least one of his guys will be drafted, but his prediction goes beyond the Tigers’ roster.

“My prediction is five to seven, maybe 10 guys that should be drafted,” Sanders told The Associated Press. “We have at least 15, 16 truly draftable guys, more that I feel like probably are going to get drafted. Exposure helps. What’s going on and what’s translating today in HBCU football is helping tremendously. We’re getting a lot of shine.”

Here are the HBCU players that Sanders believes deserve to be drafted:

Although Sanders loves where he is at Jackson State, he considers himself a part of the HBCU family as a whole.

Coach Prime hopes his voice can help to elevate the voice for all HBCU programs and players.

“We’re doing a better job of the exposure,” Sanders said. “We’re often overlooked and under exposed, which is something that we’re trying to tackle right now … It’s just absurd to me … I worked at the NFL Network for almost two decades and played for 14 years. I know what a professional looks like, and there are a multitude of these young men that can play the game at the next level, if given the opportunity.

“When you don’t see a player visually, it’s hard to understand that he’s equipped and he could participate. If you didn’t see the players from Alabama on television every darn week, I’m pretty sure the number that they’re circulating into the NFL would cease a bit. You never see these kids and you don’t understand what they’re capable of, and I’m telling you they can play this game.”

The first round of the NFL Draft begins on Thursday night and the first HBCU player to hear his name called could sneak into the first three rounds.