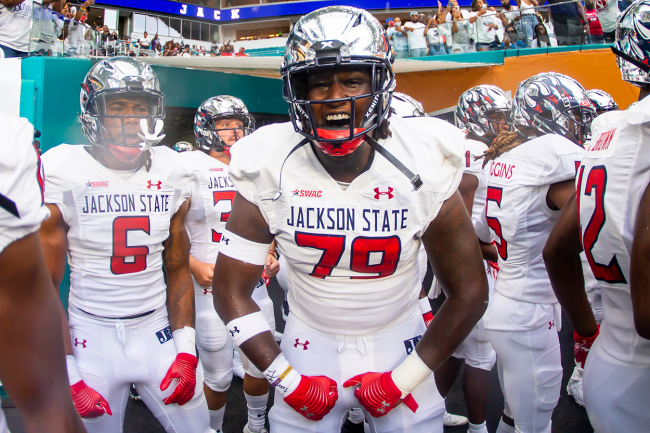 Jackson State head football coach Deion Sanders missed three games earlier this season due to complications from foot surgery. Coach Prime made his return to the sideline on Saturday and the evening included a heartwarming moment and ended in a brawl.

Sanders, 54, is not at full strength just yet. He only returned to practice on Wednesday and was spotted in a wheelchair on Saturday night.

Well isn't this a surprise…

Jackson State head coach Deion Sanders made the trip to #Southern as he is still recovering from foot surgery. @WAFB9Sports pic.twitter.com/R4JLNT2jsM

In the closing moments of the Tigers’ game against Southern University, Sanders’ son and the team’s starting quarterback, Shedeur, threw a go-ahead touchdown to take a 21-17 lead. Shortly after throwing the eventual game winner, Shedeur shared an awesome moment with his father.

I’m so proud of our young men for tonight’s comeback win @GoJSUTigersFB. This was right after @ShedeurSanders threw the game winning touchdown to @mightymal13 with under 2 minutes left. I love y’all and I BELIEVE! pic.twitter.com/us09scVfnC

However, after forcing a turnover to secure the win, Jackson State got the ball back and started a kerfuffle. As the Tigers took a knee to take down the clock, one of the players took a team flag from the sideline and went to plant it on the 50-yard-line.

The Southern side took umbrage with the actions. Moments later, a brawl broke out amongst the two teams with a lot of punches and pushes being thrown around.

Postgame fight between Southern and Jackson State after JSU tried to plant their flag on the SU logo. @WAFB

(Disregard me hitting a 4.4 flat running to midfield) pic.twitter.com/BNzt4cInd6

“Something I’ll have to see. I don’t really wanna speak on anything like that.”

“I’ll have to see it on film. A lot of things were going on. I didn’t see a whole bunch.”

The SWAC released the following statement:

The Southwestern Athletic Conference is currently reviewing the incident which took place at the conclusion of the Jackson State at Southern football game.

After a comprehensive review the Conference Office will make a determination regarding necessary next steps in accordance with the league’s constitution and bylaws.

The Southwestern Athletic Conference upholds a high standard of good sportsmanship and any conduct deemed detrimental to those efforts will be handled appropriately.

Jackson State is currently 9-1, ranked No. 18 on the FCS level, and positioned well for a deep run in the playoffs. It is unclear as to when Sanders will be able to return to his head coaching duties.