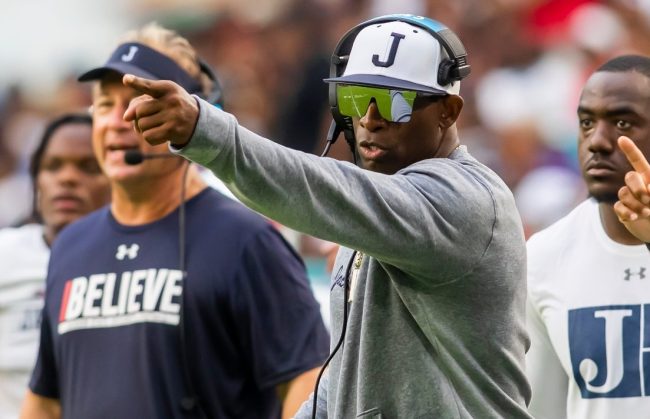 The NIL deals have completely taken over the college football landscape. Players across the nation are signing some rather ludicrous deals to play college sports. However, it’s been all over the place as it feels like we’re in the wild west when it comes to paying college athletes. Now, Jackson State head coach Deion Sanders weighs in on how the NIL is impacting players’ decisions for their NFL careers.

Deion Sanders Wants Players To Think About The NFL, Not NIL

During an interview on SportsCenter, Sanders provided his opinions about NIL deals in college football. Clearly, the bigger schools will have an advantage as they will have more money-making opportunities for the student-athletes. Jackson State is a small school, so Deion Sanders has to utilize a different strategy in recruiting.

.@DeionSanders weighed in on NIL on SportsCenter 👀

"I want these kids to start back focusing on the NFL not the NIL. … The NFL is what's going to sustain you and maintain you, not the NIL." pic.twitter.com/b3PowBT0rl

Sanders makes a great point about the mindset of how athletes are choosing where they’ll play. The coaching staff and scheme fit still play a large role, however, the money these NIL deals provide can easily persuade someone to play elsewhere. For that reason, Deion Sanders likely reverts back to his coaching style and paints the picture of why Jackson State is the best place for his guys to go to the NFL and succeed.

The NIL has been a bit wonky, but it’s given the athletes some compensation they’ve deserved for quite some time. Maybe one day it can balance out and small schools like Jackson State can compete with the big schools. Until then, Deion Sanders is going to have to get creative to reel in the top recruits every year.