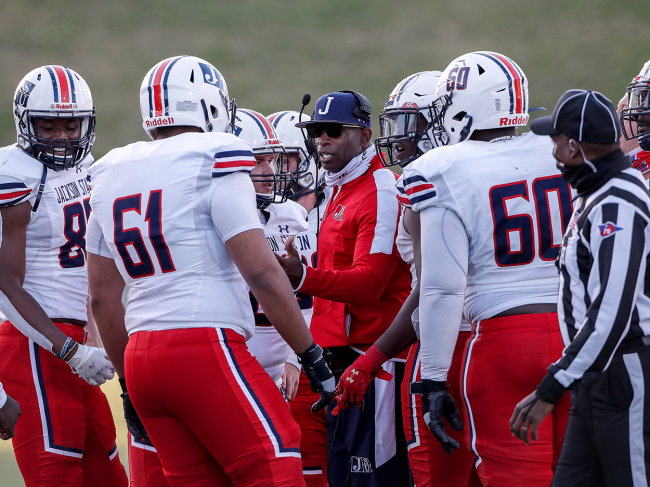 The culture at Jackson State has seen a complete overhaul under head coach Deion Sanders. Not only is there more talent in Mississippi than ever before, including the nation’s No. 1 overall recruit Travis Hunter, but the turnaround on the field in just two years has been astounding.

After six-straight years with five wins or less, Coach Prime had a winning record during his COVID-shortened first year and then won the most games in program history last fall. Jackson State won 11 games and won the SWAC.

This year, now that they have an even bigger target on their back, the Tigers have to work twice as hard to repeat the success from 2021 in 2022. As they look to do so, Mike Zimmer will be on the sidelines as an analyst and the team’s incredible, brand-new facility is in full use.

Although Coach Prime means business, he always makes sure that his guys are loose and having fun. Jackson State had an extremely hype dance battle and a freestyle battle amongst small position groups after practices during the spring and followed it up with a whole team rap battle on Thursday.

With the entire roster and all of the coaches gathered in the team’s brand new meeting room (it’s gorgeous), the two sides of the football separated down the middle. The offense was on one side and the defense was on the other.

From there, representatives from both sides got up and laid down some bars. They did not hold back at all, with disses flying left and right. Nobody was safe— not even the coaches.

Take a look at how it played out, it’s extremely lit:

Clearly, chemistry is not an issue at Jackson State, but some of the guys might be running after coming after their coaches!