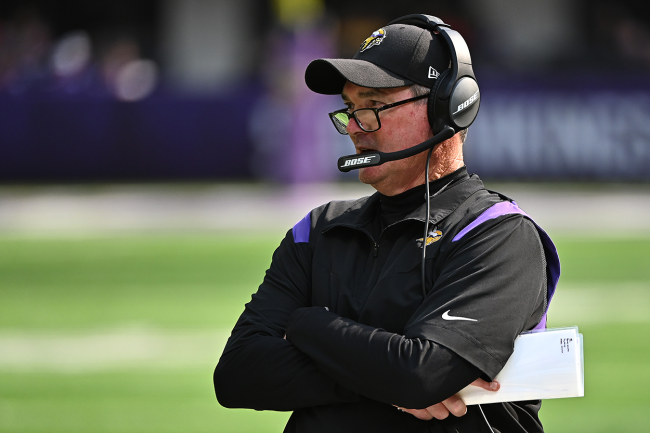 Mike Zimmer has not coached football on the collegiate level since 1993. Over the last 29 years, he has served in roles with the Cowboys, Falcons and Bengals before spending the last seven years as the head coach of the Minnesota Vikings.

That is about to change this fall.

While coaching the defensive backs in Dallas from 1995 to 1999, Zimmer had Deion Sanders in his secondary group. Now they are teaming up together in a different capacity— the former will be coaching under the latter, at least to some extent.

According to HBCU Gameday and multiple reports, Zimmer is joining Coach Prime’s Jackson State football staff as an analyst. He was introduced to the team on Tuesday in the Tigers’ newly re-furnished football film room.

While speaking about the position with Thee Pregame Show, Zimmer joked that he is taking a significant pay cut after making millions in Minnesota.

“He’s asked me about it a few times. The pay’s not good,” he said. “But I do love Deion and I’d do anything for him.”

Mike Zimmer was not joking about his relationship with Deion Sanders.

The 66-year-old once answered a phone call from his former player during a press conference. They are like that.

Although he is long removed from his time in the NCAA, Zimmer coached a decade on the collegiate level in the 1980s with Missouri, Weber State and Washington State. The game has changed a lot over the last thirty years, but his analyst role will allow him to learn just as much as teach.

In addition, Zimmer said that he did not know much about HBCU schools before Sanders took the job in Mississippi, but that he has been paying a lot more attention since former NFL players like Hue Jackson and Eddie George started taking over programs.

“Eddie George was a terrific football player,” he said. “I just think it’s great — not just for black people but also white people, white students to understanding all about the history of what has gone on at all these great institutions.”

Ultimately, as notable as George and Jackson may be, Zimmer took the Jackson State job because of Coach Prime.

“He can open up so many doors for these young men but I’m extremely impressed with the way he’s teaching them about life and not just football. And taking care of them, and talking to them about the real things that go on in the world and not the fluff stuff.”

Here are Zimmer’s full comments about Sanders, the Tigers, HBCUs, and his new role.