Deion Sanders Says Too Many Players Get Into The Hall Of Fame: It’s ‘Becoming A Free For All’ 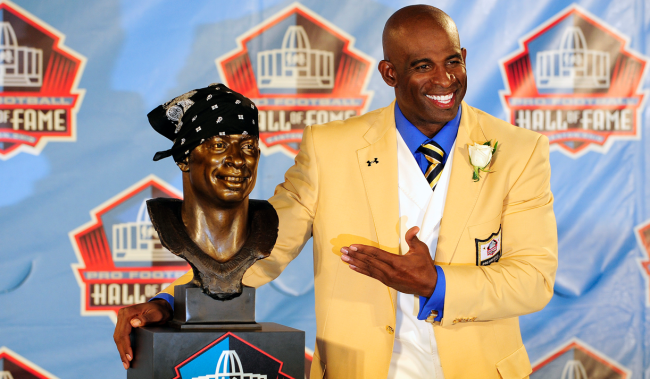 “I love it, I respect it, I admire it,” he explained while sitting in his office at Jackson State. “I think all the guys who are inducted are definitely deserving — but it needs to be a different color jacket.

“I’m sorry. I’m just being honest,” Deion continued. “I’m saying what y’all thinking and a lot of y’all Hall of Famers are thinking the same thing. This thing is becoming a free-fall now, man.

“If you play good, no. It’s people that changed the game! That’s what the Hall of Fame is. A game changer. Not, I played good. I had a good little run. I gave you three, four good years. No, dog. Game. Changers!”

During an interview with Dan Patrick in 2020, Sanders said, “What is a Hall of Famer now? Is it a guy who played a long time? It’s so skewed now, I don’t know what’s what.

“Once upon a time, a Hall of Famer was a player who changed the dern game, who made you want to, to provoke you to reach in your pocket and pay your admission to go see that guy play. Forget the rest of the team. You wanted to see that guy. That’s not a Hall of Famer anymore.

Sanders said, as he did again this week, that enshrinement should be limited to “someone who changed the game. Had a profound take and a profound influence on the game. Randy Moss, Hall of Famer. Like, like, you don’t even have to think about that.”

Patrick then went on to name some names like Barry Sanders and Eli Manning, allowing Deion to make his point one more time, reiterating, “If you have to think, it shouldn’t be.”