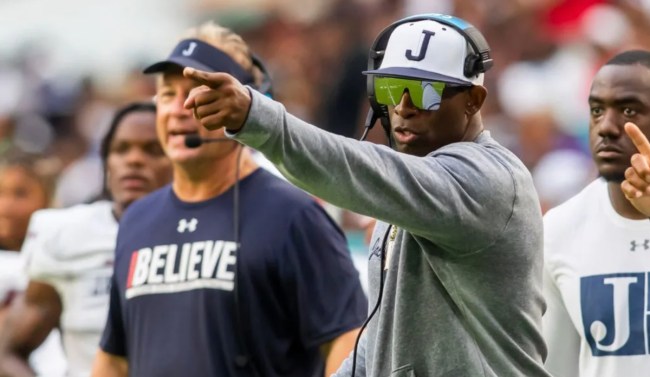 Deion Sanders’ first full season as the head coach of Jackson State was nearly perfect. Sanders helped lead the Tigers to a school-record 11-2 mark, he was named FCS Coach of the Year, and he capped the year off by signing the top recruit in the country in the class of 2022.

Outside of a loss in the Celebration Bowl, life has literally never been this good for Jackson State football.

Most would assume that Sanders and Jackson State are set to make that next step and start playing Power Five schools. The Tigers’ last Power 5 game came in 2017 when they lost 63-0 at TCU.

Sanders, however, made it clear he has no plans on scheduling a Power Five opponent anytime soon during a recent appearance on ‘The Rich Eisen Show.’

He realizes that Jackson State as a program still has to develop and he has no interest in playing in “financial beatdown” games as he calls them.

“Right now, those games are a financial beatdown. That’s what I call them. That’s what some HBCU’s choose to do,” Sanders explained. “I’m going to go to these various schools, get my butt kicked, but I’m walking out of there with $750,000 or a million dollars. That’s not worth it to me. To me, that’s the ultimate sell out to children.”

“I know I’m not going to win,” Sanders concluded. “I’m going to lose three or four players to injury and you’re going to humiliate my team and I’m going to have to build them back up the next week to play again. That doesn’t make any sense to me.”

Asked @DeionSanders about his future plans for @GoJSUTigersFB, how he's tackling recruiting against the big boys and what his sights are set on — thanks to Coach Prime for always keeping it 💯: pic.twitter.com/qnMd7nCwq4

Deion Has A Point

You can’t fault Sanders for being honest, everything he said here makes complete and total sense.

Some FCS schools literally have to play in the “financial beatdown” games to stay afloat, but right now it seems like Jackson State isn’t one of those teams.

Sanders better be careful though because if he keeps recruiting as he has been it’s going to be tough for him to find a Power Five team that wants to schedule them.