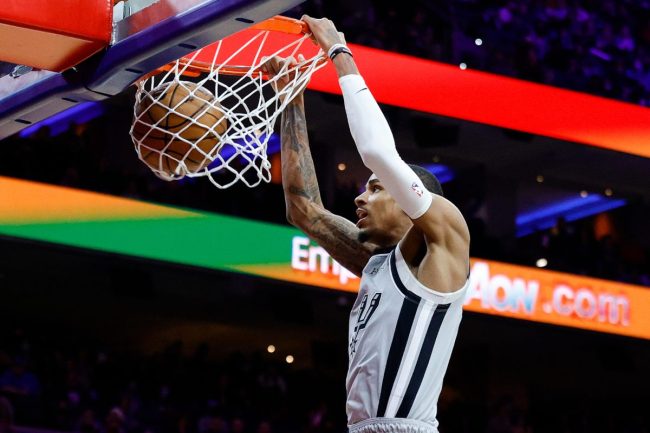 Dejounte Murray gave rookie Paolo Banchero a little preview of his first season in the NBA over the weekend. The pair were getting in some offseason work as part of the Jamal Crawford “CrawsOver” Pro-Am this week, and Murray gave the No. 1 overall pick a disrespectful welcome to the league.

Banchero was the Magic’s top pick in June, stealing the show with both his abilities and fashion sense. He’s hoping to make an impact in year one, and he’ll certainly have the opportunity to do so.

But before beginning his rookie season, Banchero is working in the offseason. He showed out earlier in the Pro-Am event, going off for 50 points in a previous matchup. While the offensive ability is obviously there, there might be some shoring up to do on the defensive end.

Murray embarrassed Banchero with an impressive alley oop. He first duped the big man with pump fake before tossing the ball off the glass and throwing down a one-handed tomahawk jam.

Here’s another angle of the impressive slam.

Fans on social media were talking about Murray’s dunk on Banchero Sunday evening.

This is a crazy highlight!

Dejounte Murray fakes out Paolo, throws it off the backboard, dunks it and then gets in Paolo’s face and throws the ball.

What Dejounte Murray did here to Paolo Banchero was just flat out FILTHY 🤮pic.twitter.com/fdUEjua6U5

This year’s #1 pick, Paolo Banchero, got schooled by Dejounte Murray at #ZekeEnd 😳