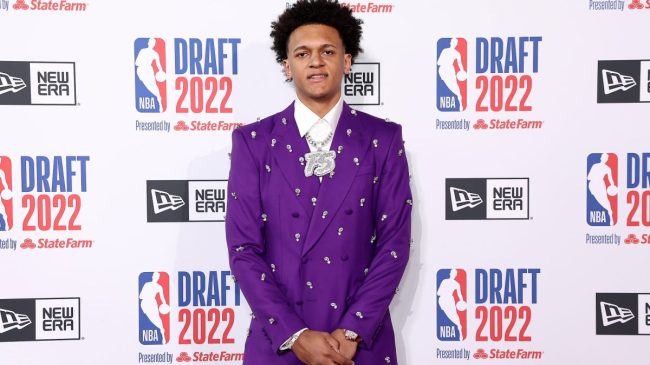 Paolo Banchero has already won draft night. The former Duke star is likely to go in the top three overall picks, with an outside chance of landing at the top spot.

Banchero was one of the top players on the Blue Devils’ Final Four squad last year, notching 17.2 points per game. He also chipped in 7.8 boards and 3.2 assists. Now, he hopes that success translates to the next level.

The first three picks of the draft are held by Orlando, Oklahoma City, and Houston.

When the week started, most mock drafts had him slotted at the No. 3 spot to the Rockets, but he began gaining a ton of momentum just prior to the event of landing first overall.

His betting odds of being taken with the first selection rose from +2200 to as high as -200. He’ll be battling Auburn’s Jabari Smith for that top spot.

While Banchero was hearing noise for his draft slot throughout the week, people are now talking for another reason.

On Thursday night, he showed up rocking a bright purple suit accompanied with a massive diamond necklace. The outfit had everyone on social media going crazy.

Folks were blown away by the young star’s suit choice. Take a look at the initial response.

Paolo pulled up in the iced-out Grimace suit https://t.co/FzQlFNwNzo pic.twitter.com/alEEdopFGc

I chose not to cover the NBA draft in person out of concern that Paolo Banchero and I would be wearing the same suit. pic.twitter.com/PYqTBekf9j

Paolo’s suit is definitely one of one!! 😂 https://t.co/jPvu8QRMrv

Paolo Banchero already has my vote for best suit of the night.

Take a look at how it looked under the bright lights of the Draft.

The way Paolo Banchero’s suit is playing in the light is crazy, you could see it from space. pic.twitter.com/vaRLAtLVCa

There was a reason for Paolo Banchero’s choosing a purple suit. He says that he wanted to pay respect to his hometown University of Washington, even though he chose to attend Duke.

Paolo Banchero says the purple suit for the draft is a nod to the University of Washington, since he didn’t stay home and ultimately went to Duke. Wanted to show some respect to where he’s from

Banchero is already making noise in the NBA. Let’s see if he can keep it going when he gets on the floor.