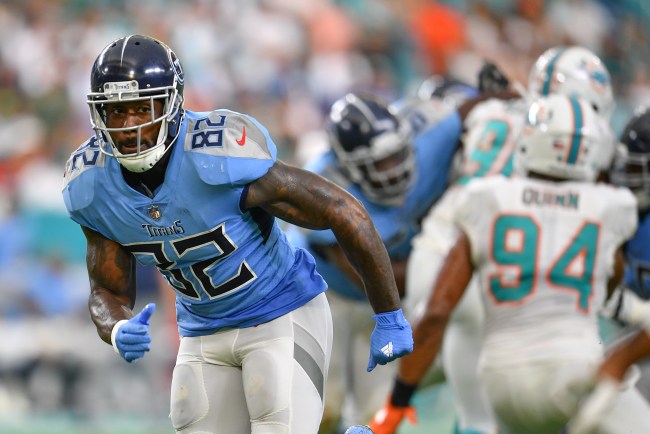 Three-time Pro Bowl tight end Delanie Walker has endured his fair share of bumps, bruises and injuries during his 13-year NFL career, but nothing had to be scarier than an incident that occurred during a 2016 preseason game against the Oakland Raiders. Talking to the Bussin’ with the Boys podcast a couple of days ago, Walker said that he “damn near died” after he got an IV treatment and the person assisting him just wasn’t paying attention.

Appearing on the podcast with teammate Taylor Lewan — who hosts the show with another teammate, Will Compton — Delanie Walker had this to say about the terrifying experience, which included commentary from Lewan that added just how severe the whole thing was.

“I got fluid in my lungs and damn near died almost in the game,” Walker said (h/t Titans beat writer Paul Kuharsky and Charean Williams of ProFootballTalk). “The [person who administered the IV] just wasn’t paying attention and the fluid was out so air seeped into my…”

“If you get a certain amount of CCs of air in your blood system…like 100 CCs will kill you,” Lewan said. “If you get enough, it will make your heart dilate in a certain way.”

Walker mentioned that, post-IV, he felt bloated, making him feel like something just wasn’t right. That led to a more in-depth conversation between the three players about how much NFL athletes deal with significant pain all the time.

“I got an IV, and I was feeling like the only reason it might be the IV was because the way you [Walker] were telling me, shortness of breath, I could barely breathe,” Lewan said.

“I don’t really get tired during games, my conditioning is really good, and so I thought to myself, ‘Something is wrong.’ I started to come back to in the second half of the game. The first half, I was all f–ked up.”

Lewan also spoke about playing through certain types of injuries.

“I think it’s a little different when it comes to injuries, especially with hands and wrists and ankles, to an extent you got to go,” he said.

Luckily, Delanie Walker came out of this experience OK without something more serious happening. The entire conversation between the players on the podcast really paints the gladiator-like mentality that’s expected in the NFL, with all three agreeing that younger players feel pressure to practice and play through injuries due to fear of getting cut. Clearly, that’s an issue the league is trying to eliminate, but it’s a difficult thing to monitor.