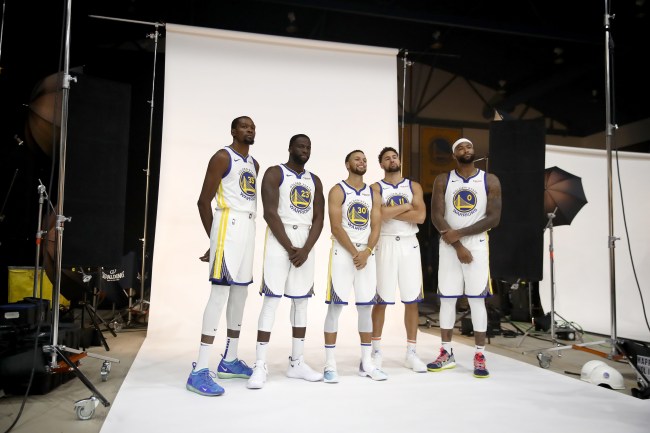 Golden State Warriors center DeMarcus Cousins, aka Boogie, has his sights on a huge NBA season with a new team this year once he makes it back to the court. He tore his left Achilles tendon back in January and underwent season-ending surgery on January 31st which for a lot of athletes could mean the end of a career.

A video emerged back in September that showed Boogie Cousins playing at full speed and that probably went a long way to assuage the fears of anyone worried about his health. Here, you can see that the Warriors’ center appears to have regained full mobility. But this clip’s got nothing on the defensive display he just put on at Malcolm X Academy in San Francisco.

First, here’s that clip from September of Boogie looking healthy:

Now, THIS is the clip that has me convinced Boogie’s back and his new team, the Golden State Warriors, are a lock to win the NBA Championship again (which they already were anyway). Here he is a destroyer of worlds, just brutally swatting away every kid’s shot attempt.

He’s not here to let these kids score on him so they can go home and tell their family, friends, and anyone who will listen that they scored a bucket on DeMarcus Cousins. No, he’s at this school to show these children that nothing in life comes easy and if you want to score on Boogie you’re going to have to earn that bucket. Sadly, none of these kids seemed to have the Mamba Mentality needed to drive past him and score.

The 4-time NBA All-Star looks to get back to his dominating ways on the court this season after his Achilles surgery and if this clip of him destroying the hopes and dreams of little children is any indication then I think we can expect very big things from Boogie this season.