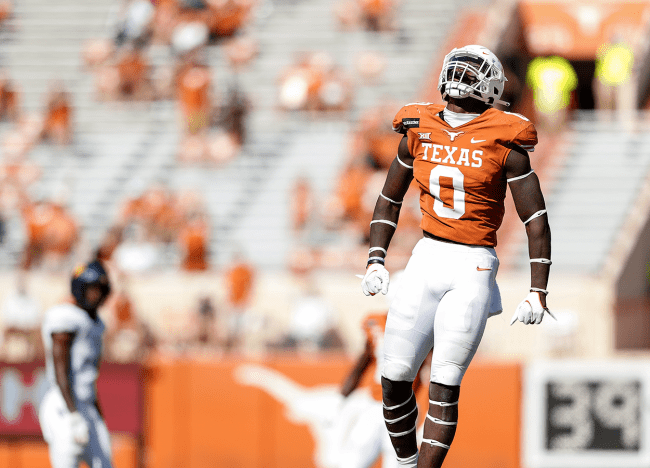 As Texas football tries to return to relevance in 2022, fifth-year linebacker DeMarvion Overshown is going to be a crucial part of the Longhorns’ success. Because of his role on the field, he is driving an iced out, jacked up truck off of the field.

Overshown, a former four-star recruit who was a Butkus Award semifinalist last season, rocks a look that really stands out amongst his teammates and competitors. When he steps onto the field, he wears the Number 0 and a lot of sweatbands.

He is just as flashy when he gets in his whip.

Earlier this year, Longhorns running back Bijan Robinson signed an NIL deal with Lamborgini. Overshown went a different route. He signed a deal with Covert Hutto Ford Chevrolet, a dealership just outside of Austin.

Agent 0 on a Covert mission in this 2021 Ford F-150 Black Ops Edition brought to you by my team at @coverthutto . Visit their website at https://t.co/VAIiJtF2RU mention that I sent you and save $500 off your next vehicle today!#CovertHutto #wickedliftkit #ford #liftedtrucks pic.twitter.com/b7HB8lcHXg

Presumably, as part of the deal, Overshown got a new truck. Whether it is his to keep or a loaner, and whether he purchased it himself or not, it’s rather eye-popping.

It’s a brand-new Chevy Silverado with a huge lift and even bigger wheels.

And then Overshown had it painted green, calling it ‘Lizzie,’ like ‘Lizard.’

Catch Lizzie and I cruising through town! 🦎 Go to my Instagram for a chance to win $500 at @maaconorthamerica #ad pic.twitter.com/JJ7x6FAiCt

Overshown even had a light kit installed so Lizzie’s glow can match the color scheme while he’s driving home from practice late at night.

Happy St. Patrick’s Day from Lizzie and I🍀💚 pic.twitter.com/gGYsTY4scI

During a recent hype video from Texas Football, the team took a step away from the gridiron and focused only on Austin as a whole. They showcased the city, its events and its landscape.

It also featured a clip of Overshown and his wheels.

Bijan’s Lambo is nice, but we gotta show love for DMO’s truck pic.twitter.com/C4yayyP7U9

Overshown is riding into the 2022 season in style.