Dennis Rodman Says The ’96 Bulls Could Beat The 2018 Warriors, Michael Jordan Could Average 50 Points A Game And Insults Draymond Green 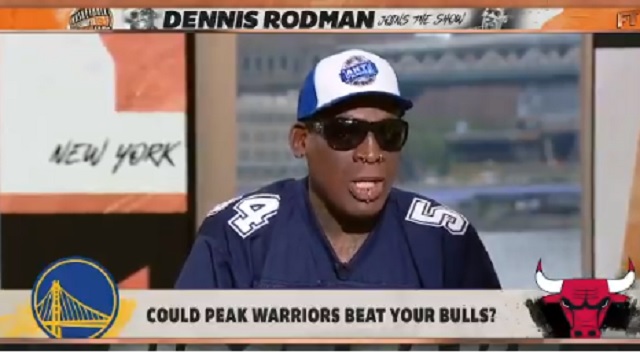 Last week Ryan Hollins caused a bit of stir when he went on ESPN’s ‘First Take’ and said that Golden State Warriors “could run laps” over the Michael Jordan led Bulls team.

Shaq's response: "Whoever’s paying him to say all this stuff, I will pay you double to stop it”

@TheRyanHollins seems even worse at thinking and talking about basketball than he was at playing basketball and that's sadly impressive in a way because he was really really bad at playing. it's even sadder than someone is paying him.

Today, First Take brought in a member of those 90’s Bulls teams, Dennis Rodman, to ask him what he thought and Rodman believes the Bulls would match up very well against the Warriors.

—@dennisrodman on how he'd match up with Draymond Green pic.twitter.com/tOyK6go3vn

“Kevin Durant would have a hard time with Scottie Pippen. And I don’t know who would guard Michael Jordan on the Warriors. Literally, who? Literally, who?”

“I got no problem handling that Green guy. He’d be eating out of my hands. Draymond, keep getting your teeth straight, honey, and listen to your mama.”

Dennis Rodman has a message for Draymond Green "Keep getting your teeth straight" 🤣🤣 pic.twitter.com/C4pOynuFv6

Dennis also went on to say that he believes Michael Jordan could average 50 points a game in today’s modern NBA.

Dennis Rodman says Michael Jordan is the 🐐 and would average 50 today.

Rodman may be a bit goofy but he does know his basketball and it’s hard to argue against anything that he said.