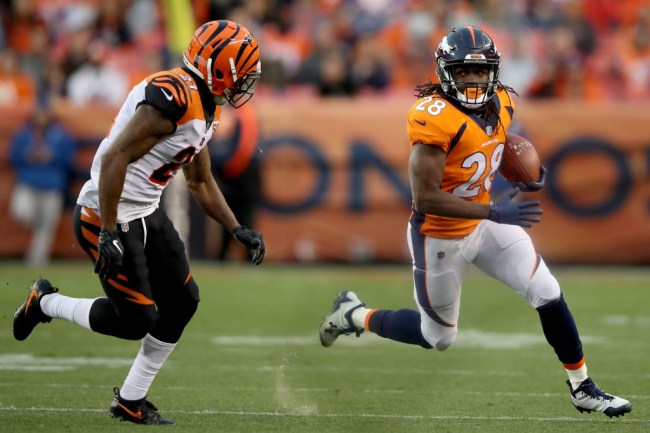 The Denver Broncos appear to be done with Jamaal Charles and are looking to save money before letting him go in the offseason. Charles who has 425 yards from scrimmage this season is getting benched in the final game of the season and will not be allowed to attempt to collect a $100k bonus for getting 500 yards from scrimmage for the season. Charles will also miss out on an extra $78k bonus for not being dressed for the game.

Jamaal Charles expected to be inactive for the second-straight game. He won't get a chance to earn a $100,000 bonus for reaching 500 scrimmage yards (he has 425).

According to Charles’ contract details (published by KUSA-TV’s Mike Klis), the running back could have earned up to $1.25 million worth of incentives this season based on his performance. The first bonus would have been $100,000 for 500 yards from scrimmage.

Charles needed to average just 37.5 yards per contest in Denver’s final two games to reach that first incentive. Now he won’t even get an opportunity to. He’ll also miss out on a $156,250 bonus for dressing in the team’s final two games ($78,125 per game).

Charles has been critical of how the Broncos have used him all season when he called for his release earlier this year.

“I ain’t playing. Might as well. No reason for me to just sit around and look at people play,” . “At the end of the day, I just got to see what’s the future for me. That’s the next step. If it’s somewhere else or if somebody wants to pick me up. That’s the future. “I thought we were all going to get a chance to share the ball. I never got a chance to be in the first 15, and it sucks,” Charles said. “How the other running backs — like I look around and see the Patriots share the running backs and New Orleans. You know what I’m saying? I just never got an opportunity.”

Seems like a pretty cheap move by the Broncos, but hey, business is business.