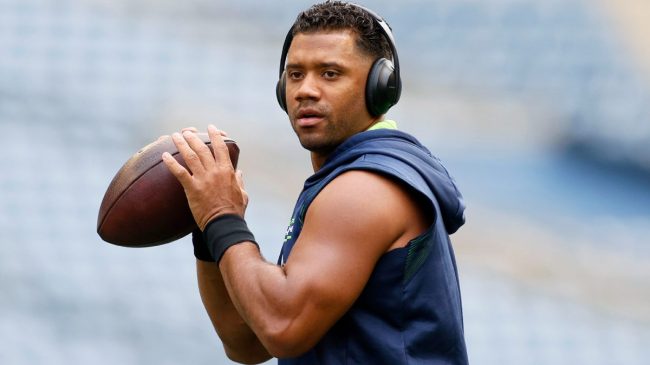 Denver Broncos fans are as excited for the upcoming season as ever before.

The team landed star signal caller Russell Wilson this offseason, giving the offense a proven playmaker under center. Now, he’ll team up with some talented pass catcher on the Broncos’ roster as Denver looks to move up the ladder in a very competitive AFC West.

One of those talents at wideout is Jerry Jeudy. The former first-round selection should be Wilson’s top target in 2022, and the two could create one of the better duos in the league’s passing attacks.

Jeudy has hauled in 90 passes over his two-year career, racking up 1,323 yards in the process. Wilson will give the youngster his best quarterback to date, meaning an uptick in production will certainly be expected.

With the Seahawks, Wilson was a Pro Bowl passer in nine of 10 seasons. He’s thrown for more than 37,000 career yards while totaling 30 or more touchdown completions in four of the last five years.

Simply put, this offense has an opportunity to thrive with Wilson in the driver’s seat.

With Wilson now in Denver, he and Jeudy are already beginning to work on their chemistry. Fans got their first glimpse of the new teammates with Wilson posting a late-night training session early Tuesday morning.

It has Broncos fans fired up.

With the season nearing, Wilson is getting in some work with his new pass catching teammate. A video of the quarterback throwing some absolute darts to Jeudy is now going viral on social media.

Check out the impressive footage below.

Wilson to Jeudy.
Rain or Shine.
Morning or Night.@JerryJeudy 🏈 pic.twitter.com/yt8BoNFKoQ

This clip has Broncos fans excited for the upcoming season. They’re ecstatic to see the duo putting in the offseason work, and they can’t wait to see what’s to come.

I can’t wait for this connection baby https://t.co/j2pjVEtBMb

Coach Hackett has GOT to be thrilled with this video!#BroncosCountry https://t.co/2wjFukPS5H

Excited to see Russ ball with the new squad! https://t.co/PKB02ZLTgu

Oh we about to go crazy! Jeudy best year coming up! https://t.co/faMlRiYl21

Damn, these throws are better than any I've seen from a Broncos QB in a while. Beautiful throws https://t.co/GohJZL7Y8D

#Broncos @DangeRussWilson getting in reps with @jerryjeudy. Jeudy appeared poised for big season a year ago before nearly breaking his ankle in opener. Now, he has 9-time Pro Bowl QB to help him realize his potential. #Denver7 https://t.co/E5jcG1MFrg

Oohhh yea this offense is gonna be Must Watch Football #LetsRide #BroncosCountry https://t.co/34Dm5RXb5g

Mannn this season is gonna be crazy I can feel it 🤫🤫 https://t.co/WVDdYtsJCY

Best duo in the league in bound! https://t.co/A6XwUJSmqt