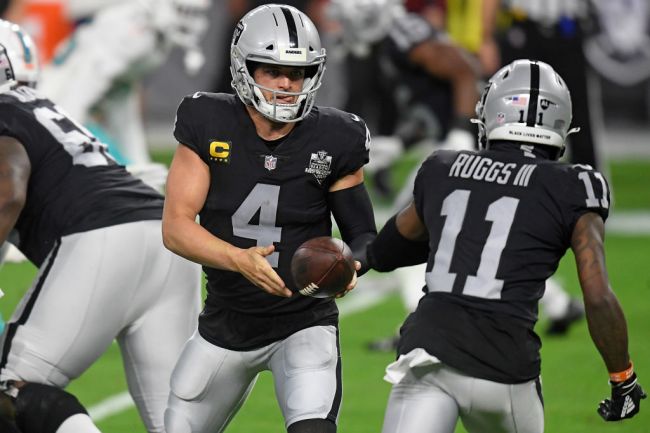 According to police reports, Ruggs was traveling at 156 mph before he crashed into the back of a 23-year-old woman’s car leaving her and her dog trapped as the vehicle burst into flames. Prosecutors say Ruggs’ blood alcohol level was twice the legal limit when tested after the crash.

Former Raiders wide receiver Henry Ruggs appears in court this morning following his arrest on suspicion of DUI in a fiery crash yesterday that left a 23-year-old woman dead.

Prosecutor Eric Bauman said Ruggs was traveling at 156 mph about 2 seconds before the crash. He was at 127 mph when airbags deployed.

His blood alcohol level was more than twice the legal limit, and a loaded gun was found in the car, Bauman said.

On Wednesday, an emotional Carr spoke to the media and revealed that Ruggs had sent him a video of himself playing golf just hours before the fatal crash.

Raiders QB Derek Carr said Ruggs texted him and Hunter Renfrow at midnight asking for golf swing tips, then he woke up to the news of the crash. #vegas #raiders #RaiderNation 🎥 @raiders pic.twitter.com/ra4HHZVr9x

“He literally texted me at midnight a golf swing, hit me and Hunter [Renfrow], ‘How’s my swing look? You guys need to help me’ And just seeing that and then getting the news when we woke up, I just … I don’t even know how I’m supposed to handle that,”

Carr went on to talk about the wave of emotions he’s going through right now.

“My emotions have been on a roller coaster, so to speak, this year,” “My heart goes out so much … to the family, to all the families involved. No one ever wants to see this, whether it’s a football player or not, you never want to see something like this happen. It broke my wife and I’s heart, honestly. We talked about it a little bit, but I can only talk about it so much.”

Update: There is a video of Ruggs playing Top Golf hours before the crash.

Video of Henry Ruggs at Top Golf in Las Vegas in the hours before his deadly crash posted by his girlfriend Kiara Kilgo-Washington who was also injured in the crash. pic.twitter.com/NKUsTjtGpM